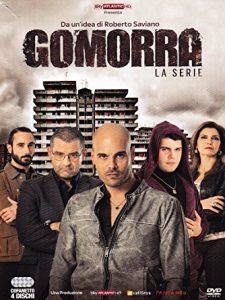 Italian director Matteo Garrone takes us into the lives of a series of people, some involved in the brutal mob Camorra that rules the streets of Naples and others who simply live along those streets. At first the story seems disjointed, but slowly a reality is exposed: evil does not just dwell in individual hearts, but also in the fabric of life that makes up society. Structural evil spins a nefarious web and none of us are fully free of it, nor can we be.

In the case of the film the structural evil ensnares people from every level of society. A mob that rules an underground world of violence and drugs. A businessman who with the collusion of politicians and law enforcement dumps toxic materials in otherwise useless rural fields. Owners of sweat shops where the poor slave to provide clothing for urban elites. Young men with no skills or education for whom no jobs exist except to run errands for gangs that draw them in like spiders reeling in flies for the kill. The details are specific to Italy, but the reality is universal.

The Christian Scriptures distinguish sources or loci of evil in this broken world. Our hearts are wicked, we are told, an inner rot we each know is at the core of our being (Isaiah 47:10, Jeremiah 17:9). That is individual evil and since we all tend to live out who we are, it is a source of evil in what we do, say, imagine, and think. The second source is identified as the world, the web of institutions, relationships, goals and values that are established in rebellion against the kingdom of God (Romans 12:2, 1 John 2:15-16). This includes structural evil, of the sort for which Gomorra acts as a metaphor for life and reality.

My life in a mid-sized Midwestern American city is far different from the everyday details of life where the streets are ruled by the Camorra, a crime syndicate based in Naples estimated to generate 250 billion dollars a year in revenue. No sentimentality here, just a gritty, grim reminder that evil produces death and destroys souls, families, and societies.

None of us are entirely free of structural evil. As far as I know, my family never owned black slaves, but my ancestors profited from that unholy business by wearing the cheap cotton textiles produced in the South. Economic echoes of slavery and segregation probably ripple through my standard of living even today. As far as I know, no ancestor fought the Native Americans who lived for centuries on the land on which my house and city now rest. But I have profited from the broken treaties and wholesale slaughter visited on them by whites like me that saw them as little more than savages on the level of animal life. I fill my car with gas and as the gallons flow into the tank I think of the pollution, international plunder, and unjust tax policies that encourages my nation—encourages me—to use resources not as a fragile gift from God but as something we somehow have a right to expect and expend with carelessness.

Director “Garrone,” Roger Ebert says of the film, “uses an unadorned documentary style, lean, efficient, no shots for effect. He establishes characters, shows their plans and problems, shows why they must kill or be killed—often, be killed because of killing. Much is said about trust and respect, but little is seen of either. The murders, for the most part, have no excitement and certainly no glamour—none of the flash of most gangster movies. Sometimes they’re enlivened by surprise, but it is the audience that’s surprised, not the victims, who often never know what hit them. The actors are skilled at not being ‘good actors,’ if you know what I mean. There is no sizzle. Only the young characters have much life in them. Garrone directs them to reflect the bleak reality of their lives, the need and fear, the knowledge that every conversation could be with their eventual killer or victim. Casual friendship is a luxury. Families hold them hostage to their jobs. The film’s flat realism is correct for this material.”

Gomorra written by Roberto Saviano, who is now under 24 hour guard for his efforts at accuracy. It isn’t the most pleasant film ever made, but then I suspect that it wasn’t meant to be. It was meant to help us face the nature of reality in a broken world, a reality we work hard to rationalize and ignore, rather like the characters in the film do.