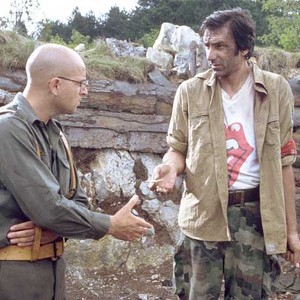 The year is 1993 and war has come to Bosnia. Two soldiers, a Croat and a Serb, find themselves caught in a trench between the opposing front lines. It’s a deadly conflict, and the film takes it seriously as it should yet the story is told with a deliciously biting sense of irony. And when the United Nations peace-keeping troops show up, led by an officer—appropriately named Soft—the irony only makes the pain of the situation that much deeper. Although No Man’s Land won an Oscar (Best Foreign Film, 2002) I didn’t expect to enjoy as much as I did. This is a sensitive story, sensitively told and filmed in a way that is plausible, deeply human, and simultaneously comic and tragic.

War is one of the most indelible proofs of the world’s brokenness, a horror that is sadly as old as human history. The wisdom literature of the Hebrews identified human evil not simply as wickedness and rebellion but also as folly—a foolishness so profound, so innate, so invasive that it mistakes darkness for light and imagines being lost in the cosmos as a proud declaration of personal autonomy. “Let a man meet a she-bear robbed of her cubs,” an ancient proverb says, “rather than a fool in his folly.” No Man’s Land successfully navigates a difficult line, revealing the brutality of a modern battlefield as a place where folly reigns supreme. We watch the plot unfold, laughing while being sobered.