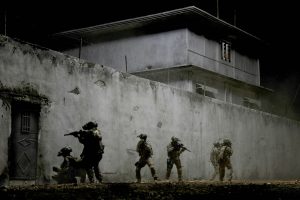 We need to talk
Like Hurt Locker, Kathryn Bigelow’s 2008 Oscar winning film, Zero Dark Thirty is a compelling war film, appropriately gritty and compelling. It tells the story of the raid by the U. S. Navy SEAL team in 2011 in which Osama bin Laden was killed and the ten-year search by the intelligence community that led up to it.

I am aware of the controversy surrounding Zero Dark Thirty. It’s been so public that I have trouble believing anyone who is half-alert to the news wouldn’t have heard about it. One voice expressing dislike of aspects of the film is that of Glenn Carle, a former CIA agent involved in interrogating terror suspects. In an online post, “Zero Dark Thirty—Torture Is the American Way?” Carle issues a strong warning to his fellow citizens:

Zero Dark Thirty, Hollywood’s version of how we killed Osama bin Laden essentially says that torture works. Torture is disturbing, but tough, and American heroes do it.
Do not be misled. Pay attention: The men and women who hunted, found, and killed Osama bin Laden—and heroes they are—did not need to use torture. Torture is un-American. It is evil. We found bin Laden using painstaking intelligence work, not waterboards.
The shocking opening scenes and the underlying premise of Zero Dark Thirty, the latest fillip of the torture hagiography to afflict and pervert American society insidiously propagates the view that torture is necessary; tough men and women must make tough decisions, right? It becomes clear how deeply America’s moral frames of reference have deteriorated when we realize that it was Kathryn Bigelow, a Hollywood director and power, and not a known shill for the Neoconservatives, whose film presents torture as having been instrumental in finding Osama bin Laden, and that “enhanced interrogation” is Americans doing what Americans must do to protect home and hearth.
“In an otherwise laudable film,” Carle concludes, “Zero Dark Thirty’s opening scenes corrode our culture, just as ‘enhanced interrogation’ has.”

I don’t wish to nitpick here, but I think a distinction is important. The torture permitted under the Bush administration did indeed corrode American society, our nation’s reputation, and our ethics as a people. I think the opening scenes of Zero Dark Thirty are an example of one of the essential roles that art plays in a fallen world: to make us think. My fear is less that the film will corrode our society than that we will fail to think. Even if you don’t like war movies, please see Zero Dark Thirty. If you are troubled by it, don’t be alarmed: it is a troubling film, and is designed to be. You should be alarmed if you are not troubled by it.

My opposition to what was euphemistically termed “enhanced interrogation” is not because they repulse me, though the opening scenes of the movie were very hard to watch. I am opposed because my Christian convictions, informed by just war ethics, concludes they are evil, unjust, and dehumanizing. From a biblical perspective, even terrorists intent on attacking us are persons made in God’s image and deserve to be treated as such. America has never lived up to its ideals, but its ideals are better than this. “For a time,” Jill Lepore, Harvard historian writes, “Americans interrogating suspected terrorists were not answerable to any rules, except those made, ad hoc, by the Bush Administration. The White House’s answer to terrorism, which is an abandonment of the law of war, was the abandonment of the rule of law.”

Thankfully, when Barack Obama became President he put an end to this evil practice and closed the door on this sad episode in American history. I am not convinced, however, that as a people we have thought about this issue or discussed it sufficiently. That our leaders could so easily sacrifice our deepest ideals in the name of security is troubling. In fact, just war principles had been raised in the last few decades as justification for conflicts in which American soldiers would be participating. Why did such ethical considerations not enter the picture here? The rule of law in war is vital because without it a nation can win a conflict only to discover that in the process they have sacrificed their souls.

Terrorism remains a sad fact in our broken world, the yearning for security still lingers amidst the fears generated by the daily news, and decisions need to be made about fresh threats as time goes by. We need to talk.

Now, under a Democratic Administration an equally troubling specter has become a regular practice in the name of America, but again, with insufficient discussion as a people. It too is in the news, but has yet to appear in a film troubling enough to get a thoughtful conversation off the ground. I refer to the use of drones. I understand their appeal: besides their obvious cost effectiveness, drones provide the ability to use smart weapons to target individuals and groups without endangering the lives and safety of American troops. Perhaps they have a place in the pursuance of a just war. As a Christian, however, I remain dissatisfied with and concerned for the status quo, described by Dr. Lepore: “…the New York Times has reported that the Obama Administration holds ‘Terror Tuesdays,’ meetings in which the President and his national-security advisers discuss which suspected terrorists, remaining at large, should be assassinated by drones. In about a third of these cases, the President alone takes responsibility for naming the targets, which have included American citizens.”

This is insufficient, badly insufficient. Just war ethics requires a far clearer reliance on legal accountability and the rule of law. Again, we need to talk.

Both topics, the use of torture and the use of unmanned drones, are difficult to face and more difficult to discuss with civility. Still, this is a national conversation that is badly needed and that needs Christians as participants. For one thing, civility is not an option for us since the command to love even our enemies requires it. Hopefully that will help. And because our faith reveals a worldview that under Christ’s Lordship addresses every aspect of life and reality, we can join the discussion with something substantial to contribute. That may require some thinking and research of our own, but that’s simply a part of faithfulness. As Christians we care about security because we believe in justice but we don’t idolize it because we know perfection is not possible in this insecure world and that we are called to give our lives for our neighbors. That means we can contribute to the national discussion without defaulting into any political ideology. And in our highly politicized society that is a grace.

Sadly, Christians are often contributors to both the lack of civility and the polarization in the public square. May we repent of our lack of love (which is what civility is) and idolatry (which is what a commitment to political ideology is), and return to the first principles of God’s kingdom. Then we will be ready to enter the conversation.