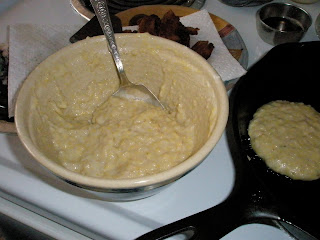 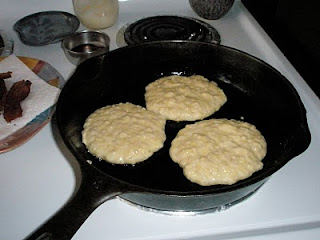 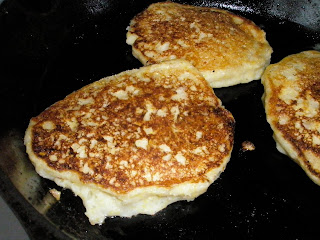 With the L’Abri conference coming up this weekend, am prepping for workshop “Cast Iron Rises Again.” I was reminded last night of how often in the past week I’ve complained about PowerPoint, time, idiotic decisions like de-gunking your cast iron in the cleaning cycle of your electric oven, which takes three hours, and can’t be stopped once it starts and just when you need it to make the recipe you promised to bring to your daughter tomorrow so you stay up half the night finishing it. WHAT were you THINKING? No worries, though, just typical spleen for Margie. I’ll get there.
I’m posting a recipe. Perhaps the thought of pancakes with crispy edges and a middle melting in pure maple syrup will restore me to at least a pretence of godliness? Probably asking too much.
In the coming weeks I will regularly post one of the recipes I have used in my cast iron cookware. I know most people probably think pancakes are about it for the iron skillet, so it’s a good place to start.
These are pancakes with a bit of a twist. We really like them and everyone I serve them to snarfs them down and asks for more. First surprise: it is a gluten-free recipe, and oddly enough, it works so well it doesn’t matter if you’re trying to be gluten-free or not you’ll like them. The second surprise is that although I’m a scratch cook, the foundation for this recipe is a mix! Bob’s Red Mill Gluten-Free Cornbread mix. He also has a regular cornbread or corn muffin mix for those who’d rather try it with wheat. But these days with more people showing up with celiac disease it’s nice to have some standard g-f recipes in your choir. You’ll be amazed by how light and tasty these are.
Oatmeal Pancakes Gluten-free
1 ½ cups Bob’s Red Mill Gluten-Free Cornbread mix
¼ cup buckwheat flour* (optional)
1/3 cup oatmeal** mix with 1 cup water and microwave for 1-2 minutes.
1 egg
1 T. vinegar
¾ cup milk
Always begin every batch (of any kind of pancakes) by putting a little vinegar – white or apple cider is best – in a glass measuring cup or dish and adding the milk. Let it sour on the counter while you gather the rest of the ingredients. If you have buttermilk skip the vinegar thing.
Prepare the oatmeal and allow it to cool just a little.
In a bowl, mix the corn meal and buckwheat flour. Stir in the egg and the milk. Add the oatmeal. You don’t need to beat this batter, just make sure it is well mixed. The batter should be fairly thick and it will rise up even in the bowl to be very light. If you prefer a thinner pancake add more milk right from carton.
Heat the skillet to medium high and add a little oil or butter to the pan and when it’s hot, spoon small dollops of pancake batter. Adjust heat a little so they don’t burn. Turn when the bottom is nicely browned.
Serve with maple syrup or strawberry jam and sour cream. Serves 3.
Leftovers with peanut butter and honey make good snacks.
*Buckwheat: You don’t want too much for a small batch of pancakes. It really punches up the flavor. Find it at a whole foods type store. In bulk it’s cheap.
**Oatmeal: Don’t use the pre-packaged instant. Yuck. Use regular or thick-cut for more texture. Again, available in bulk. Organic is good.