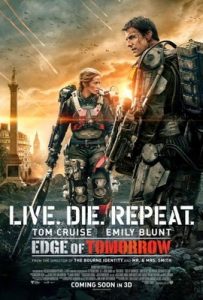 One of the reasons science fiction is a cinematic genre with enormous potential to shape the imaginations of viewers is that it can explore mysteries that are normally out of reach within the horizons of ordinary dramas. Those who tend to be dismissive of science fiction are revealing more about their class prejudices than they are about their literary or intellectual discernment.

It’s possible for characters to speculate about the nature of time over morning coffee, for example, but it’s difficult to turn time itself into the drama. Flashbacks, flash forwards, and other such techniques can give the appearance of playing with time, but in the end the viewer can sort out the time-line of the story, always set in normal chronological time.

Edge of Tomorrow, the newest adventure starring Tom Cruise, actually plays with the nature of time itself. Earth is invaded by an alien that learn as a day proceeds, and can reboot that day to take advantage of what it has learned. It can never be defeated, since it can always refight every battle with the knowledge it needs to be victorious. But then the unexpected happens: an ordinary human soldier inadvertently slips into the alien’s time loop. He too can learn in his defeat, and then be booted repeatedly to live the same day over. If you are thinking Groundhog Day (1993) meets the apocalypse, you won’t be far off.

There is a lot going for Edge of Tomorrow. Apocalyptic stories are popular. There is some strong acting: Emily Blunt (as Rita), Brendan Gleeson (General Brigham), and Bill Paxton (Master Sergeant Farell) play their roles brilliantly. The first third of the film reveals the director didn’t take things too seriously, including scenes and dialogue that made me laugh aloud. The film has the quality of an exciting video game, with endless possibilities to reboot and eventually win. And the mystery of time is attractive even if we do not have a philosophical bent. We live in time, fit in it as creatures, yet yearn to be free of it, worrying about wasting it, wishing there were a few more hours in our day, or that we could “do it over” and this time keep from screwing things up so badly.

Sadly, Edge of Tomorrow is a failure as a film. There is simply too much that is so implausible that it became difficult for me to buy into the plot. Cruise, as Major Cage, sports an unkempt haircut that no military unit would tolerate. Worse, after being tasered by MPs while being arrested for refusing General Brigham’s order he comes back to consciousness lying on a pile of duffle bags in the middle of huge, sprawling military base. Now, I haven’t been in the military nor tasered nor arrested by MPs, but somehow Cage’s end point doesn’t strike me as likely. Major Cage is a combat novice, volunteering to do PR for the army so he wouldn’t need to fight, yet soon becomes a warrior of legend. Aliens are tricky beasts, but this one was utterly unbelievable, able to reboot time but consisting of metallic squid-like fighters telepathically linked to a huge underwater glob pulsing with light. It would have been far better to show nothing at all. And the movie’s happy ending is not that the human race is saved (by Cruise/Cage, of course) but that he is now free to romance Rita.

So, you might be asking, why write so much about a film I am not really recommending? The reason is I believe the mysteries of reality—like time—are one of what Charles Taylor calls a “cross-pressure” for our secular age. When the default position is to find all meaning, morality, and fulfillment within a worldview that discounts the existence of God, such mysteries tend to haunt human beings, bringing a whispered hint that perhaps there is some slight possibility that the transcendent is real. That what we believe to be impossible and implausible might in fact be true.

The difficulty, from a Christian perspective, is that at a time when our culture needs to explore such things, much of the church is incapable of entering the conversation. The primary reason, it seems to me, is that we tend to think wrongly about God. We think of him as a separate being, out there, known by us to be spirit, absolute truth and righteousness, from everlasting the same. Our difficulty is that we imagine we have a handle on what God is because we interact with other beings all the time, so we are familiar with beings and comfortable with them. God is simply bigger than all other beings—indeed he is the very biggest of all. As David Bentley Hart points out in The Experience of God, however, this imagining is actually closer to believing in the ancient Greek notion of a demiurge than it is the biblical idea of God. We don’t mean to, but our thinking about God is simply too limiting, and limited.

“God is eternal,” Hart insists, “not in the sense of possessing limitless duration but in the sense of transcending time altogether. Time is the measure of finitude, of change, of the passage from potentiality to actuality. God, however, being infinite actual being, is necessarily what Sikhism calls the Akhal Purukh, the One beyond time, comprehending all times within his eternal ‘now’; all things are present to him eternally in a simple act of perfect and immediate knowledge” (p. 136). As God told Moses, he is the “I am.” Our error comes when we try to grasp this and end up situating God’s infinity in the flow of time that we experience and know. So, for example, events separated in time, we assume, must be simultaneous with God. But, Hart says, they are not “really ‘simultaneous’ with God at all—he has no time to be simultaneous with” (p. 137). To experience events as simultaneous is to experience them in time, just at the same time. But God transcends time altogether. Or consider the notion of choice, such as God’s decision to create in the beginning. We experience the freedom to choose as an event in the flow of time, but must not translate that to God. “His freedom,” Hart says, can be understood as consisting not in some temporal act of decision that overcomes some prior state of indecision, but in the infinite liberty with which he manifest himself in the creation he wills from everlasting” (p. 139).

That this is difficult to comprehend should not surprise us, since we are finite creatures talking about an infinite God. The fact that we are unfamiliar with such notions should suggest that perhaps our thinking about God has become so simplistic as to be unworthy of belief, to say nothing of being unworthy of God. And the infinity of God suggest we might have reason to believe that Christianity provides a singularly satisfying account of reality and its mysteries—so satisfying that it staggers the imagination.

Time and the mysteries it presents to finite creatures are indeed signals or hints of transcendence, and so will naturally appear in the stories we tell that try to make sense of life and reality. Some of those stories will be better than others, but the topic will always be a great place to begin a conversation about the things that matter most.