I argued in the first installment of this series that one reason we are drawn to detective stories is that we were made to live in an orderly world. When chaos and disorder expands, we yearn for order to be restored, even though it is never perfect or complete in this broken world.
Detective stories are also about achieving at least a measure of justice, though it too is never perfect or complete in this broken world. A crime has been committed, so the detective enters the sordid, dangerous world of the criminal, hopefully to find evidence that will bring the miscreant to justice. Our desire for justice is so strong that even though the crime may have nothing to do with us personally, if the case is botched and the criminal is freed we feel a sense of not just disappointment but anger—we believe it wrong even if we can’t justify our response with much philosophical vigor. It’s. Just Wrong. 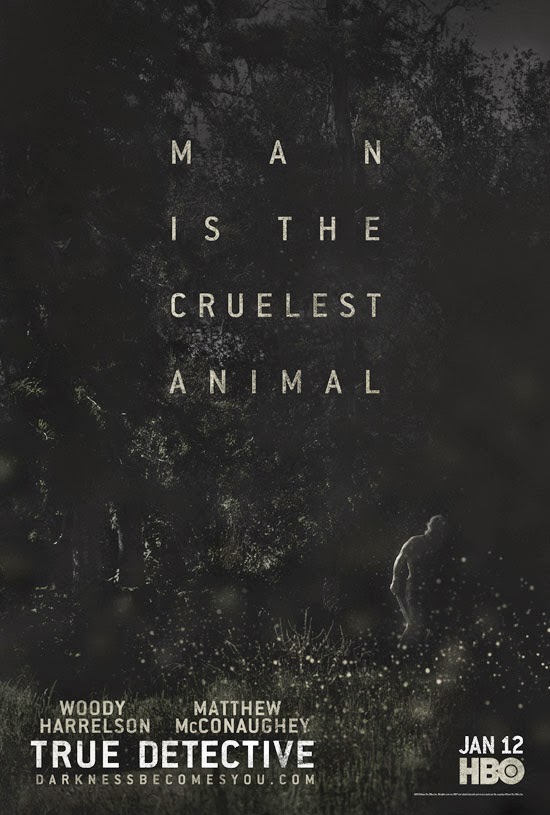 The yearning for justice is ubiquitous, deeply rooted in our humanity. This reality, James Sire says in Echoes of a Voice, leads biblical scholar N. T. Wright to include it in his list of four “signals of transcendence” that “point to a realm beyond the material world.” Wright’s four signals include “the longing for justice, the quest for spirituality, the hunger for relationships, and the delight in beauty.”
This means that detective stories tap a deep longing of our hearts, and even if only in a fictional world satisfy a yearning that is hardwired in our humanity. The question is less why some of us are drawn to detective stories, but why everyone isn’t.
True Detective
This gritty, dark, at times shocking series stands out from usual television fare. The entire season involves a single crime, and each episode follows the detectives—in this case over a period of 17 years—as they seek to solve the murder. Because it is a cable (HBO, 8 episodes, 2014) production, there are scenes of sexuality besides rough language that is more standard for R-rated movies than TV programs. And though it used to be common knowledge that television was a wasteland not worth much attention, True Detective proves that TV can be very much the opposite. 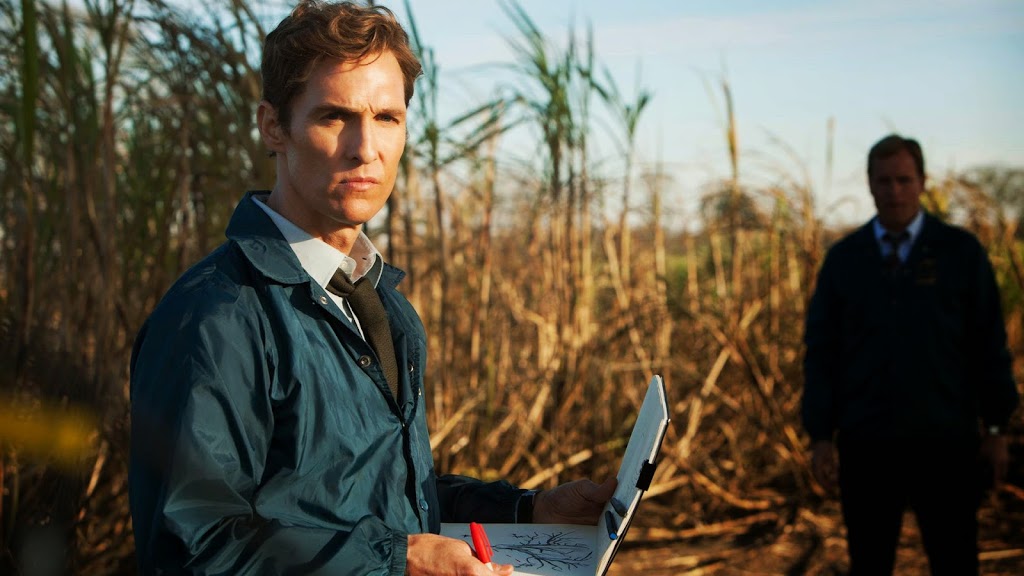 The pace of True Detective is never frantic, though the writers never allow the tension in the plot to falter. The cinematography is beyond good, so that settings and landscape shots not only fit the plot, they are lovingly produced and stunningly portrayed to become an essential part of the story. Woody Harrelson (Detective Marty Hart) and Matthew McConaughey (Detective Rust Cohle) are perfectly cast for their roles. And in a surprising and delightful twist, at least for me, True Detective is both philosophically literate and attentive. Detective fiction, because it explores the yearning of the human heart for justice, has the potential to take ideas and their consequences True Detective, a true philosophical drama written by Nic Pizzolatto, includes all these, but never cheats by depending on them to carry the story, instead using them to add color to the story. 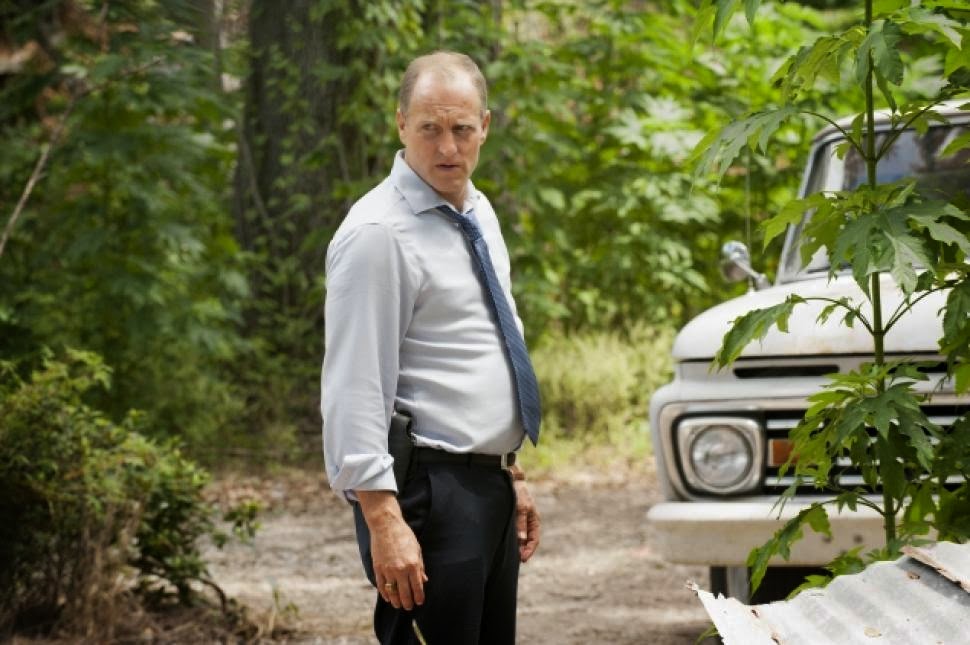 seriously. Cheap detective fiction skips that and centers on something else: the action, quirky details of the character’s life and personality, the tension with supervisors.

Best of all, T Bone Burnett was hired to direct the music for the series, and that means the soundtrack is both appropriate and a work of art in its own right. “The depth of character is the breadth of music you get to use,” Burnett says in Mother Jones. “So all I have to do is imagine what they’re listening to, and imagine the stories rattling around in their heads. How do you strengthen that? How do you make that resonate? It’s about having the songs become part of the storytelling.”

“This show does not avert its gaze,” Burnett says. “It takes a good, hard look at who we are right now, in a very profound way… I live in Los Angeles, and I recently took a drive through the middle of the country, and I was stunned by what I saw. In places that had once had purpose, all that’s left is a pawnshop, next to a gun shop, next door to a motel, next door to a gas station, with a Walmart right outside of town. There are people working three jobs just to get by and having to take methamphetamines to do it. That’s the middle of the country, and that’s a plague that’s spreading outwards. We’re not seeing it, and these are things that you see in the show.” 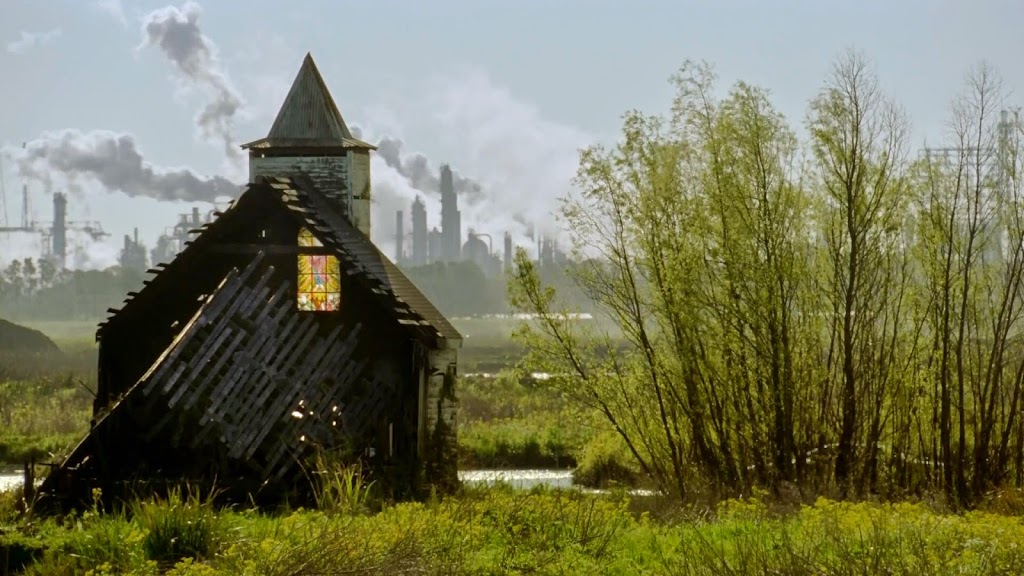