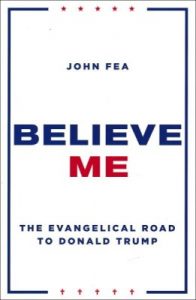 The 2016 election accomplished two things simultaneously. It put Donald Trump in the White House and it revealed some issues within the evangelical community in America. Revealed some very serious issues that need to be resolved if we hope to demonstrate Christian faithfulness as God’s people. Resolving them will not be easy but instead will doubtless be a quite painful and rather arduous task. Still, it is necessary. It is not an exaggeration to say that what is at stake is nothing less than the integrity of the gospel before the watching world.

Here are a few facts concerning what happened with evangelicals in the 2016 election. 81% of evangelical voters voted for Donald Trump to be President of the United States. This means that 19% of evangelical voters did not vote for Trump, though they did not necessarily vote for his Democratic opponent, Hillary Clinton. Some of the 19% abstained, some voted for third party candidates and others wrote in their choice.

Since that election a few more facts have come to light. Many of the 19% did not merely decline to vote for Trump, they are fiercely anti-Trump. They are also confused and angry that fellow evangelicals would support a candidate that regardless of his policy positions displays a lack of moral character. Just as America is fiercely divided between Red and Blue, so believers mirror the same division. Yet Christians are called by their Lord to demonstrate a remarkable grace-filled unity. Christian unity does not require everyone votes identically but certainly it requires that our conversations on the topic are warm, civil, charitable and full of patient understanding—and they are anything but. Some have decided they can no longer identify as “evangelical,” and others—particularly younger adults have walked away from faith and the church because the evangelical community not only helped put Trump in office, it continues to support him. And outside the church increasing numbers of non-Christians find evangelical support for Trump an added reason to reject, out of hand, the evangelical gospel.

It seems to me that all this means something is badly amiss in evangelicalism. The difficulty comes in identifying what went wrong so we can find a way forward.

All this brings me to Believe Me: The Evangelical Road to Trump by John Fea, the author of Was America Founded As A Christian Nation? (You can read my review of Fea’s earlier book here.) Believe Me may be one of the most important books for evangelicals to read, reflect on and discuss in the aftermath of the 2016 election. Our unity as the people of God, the integrity of the gospel and the meaning of Christian faithfulness in our politicized world are all at stake in this issue and Believe Me can help us begin to sort things out.

If you are part of the 81%, voted for Trump and support his slogan, Make American Great Again, please read Believe Me. You owe it to yourself to do so. Fea’s book will provide you a thoughtful opportunity to reexamine your political choices in light of your evangelical convictions. It is not written by an enemy of the faith, or by a Clinton supporter disappointed by who won the election, but by an evangelical who teaches American history at Messiah College, an evangelical school in Mechanicsburg, PA.

On the other hand, if you are part of the 19% and perhaps are anti-Trump, did not vote for him and are appalled that evangelicals would support him, please read Believe Me. You owe it to yourself to do so. It will provide you a thoughtful opportunity to understand why so many of your fellow evangelicals support him so passionately, so that your conversations on the topic might begin to transcend mere politicized debate. And it will also allow you to reexamine your own political convictions and choices in light of Scripture. You might discover that rather than holding a carefully developed biblical vision of political stewardship you merely react differently to campaigns than those who voted for Trump.

This much is certain: both the 81% and the 19% share a few things in common as evangelical Christians. Essential to our belief as evangelicals is the conviction that not only do we have nothing to fear from the truth our faith requires us to cherish it, search for it and rejoice in it. Because we follow the One who made the astounding claim to be the embodiment of truth (John 14:6), we love truth more than we love our opinions, or the bullet points of our favorite pundits, or our political instincts, or what is popular, or even what policies will do us the most good. We also believe our hearts, as Jeremiah famously asserted (17:9), are deceptive and so being challenged regularly to reconsider our ideas, assumptions and choices in light of Scripture and Christian doctrine is eagerly accepted as both good and necessary. Rather than fearing this process we know it to be life giving. Of course it may be painful—no one likes to discover they are mistaken—but we know authentic repentance is necessary to open the way to growth, to life, to maturity and to flourishing. And we believe that Jesus Christ is Lord of all. This means that the faith has something substantial and redemptive to say to every part of created life and reality. Thus, we do not adopt or adapt political ideologies on either the right or the left, no matter how attractive or popular they may seem. Instead, we believe that faithfulness requires us do the hard work to develop a thoughtful political vision rooted in Scripture and the long, rich tradition of Christian thought. This political vision will overlap with concerns and policies on both Left and Right for both touch on aspects of created reality, but will always transcend them because our primary allegiance is not to political powers and authorities but to our Lord, Christ.

As Believe Me demonstrates, our political actions do not occur in a vacuum. How we vote flows out of our convictions and values and feelings even if we aren’t fully conscious of them. This means for the evangelical that our political convictions and actions are essentially rooted in our understanding of biblical doctrine. Which means that to the extent our doctrinal convictions are skewed by our brokenness, to that extent our political choices will be mistaken. Fea digs down into what caused evangelicals to support Donald Trump so we can better assess our approach to political stewardship under Christ’s Lordship at this particular point in history. As a historian he sees the path to the evangelical support for Trump not as something that suddenly occurred out of the blue but as a path that stretches back far into the past.

“This book is my attempt to make sense of it all. I approach this subject not as a political scientist, pollster, or pundit, but as a historian who identifies as an evangelical Christian. For too long, white evangelical Christians have engaged in public life through a strategy defined by the politics of fear, the pursuit of worldly power, and a nostalgic longing for a national past that may have never existed in the first place. Fear. Power. Nostalgia. These ideas are at the heart of this book, and I believe that they best explain that 81 percent.” [p. 7]

This is not a book that stakes out territory along the Conservative / Progressive, Right / Left, Republican / Democratic spectrum and mounts an attack on the other side. Fea is distinctly uninterested in such polemics. Believe Me is instead a work of history written by a thinker that takes biblical, evangelical theology seriously. John Fea does not primarily make a political argument but a doctrinal one, helping us see how what we believe as Christians shapes our political stewardship as citizens.

Regardless of whether we are in the 81% or the 19% we have serious work to do as evangelical believers if we are to be faithful to the gospel in our political stewardship in our deeply polarized and politicized world. A good start in that process is reading and reflecting on Believe Me.