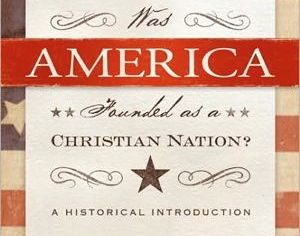 We the people
It is difficult to get Americans to agree on how Christian America was at its founding. It’s not just that Christians disagree on this with secularists; Christians disagree with one another about it as well. Specific lines from the Declaration of Independence, the Constitution, and letters and pamphlets written by early thinkers and leaders are all used as evidence of one conclusion or another. The diaries of various founders and the stories of their lives and the content of their speeches are also part of the argument. And so the debates continue with no end in sight and little promise that resolution is possible. An added difficulty is the lack of civility—my sense is that many of the debaters are not really searching for the truth but are rather seeking to score political points.

One of the reasons I am a Christian is the conviction that since all truth is God’s truth, I need never fear pursuing truth. I may not know what conclusion the evidence leads to, but I need not be afraid of what it will reveal. I may be asked questions for which I have no answer and must take time to explore, but I do not need to hesitate to say, I don’t know, but I’ll try to find out. I may even discover that the facts, when fully explored, shatter assumptions that I’ve lovingly held for a long time and that once shattered, require me to rethink a whole set of values and beliefs. The reconsideration might be painful (I never enjoy admitting I was wrong), but my understanding that my Lord is truth incarnate (John 14:6) provides sufficient reason to keep pursuing truth wherever it might lead. This basic conviction of orthodox historic Christianity applies to truth in every sphere of life, because Christ is Lord of all—including the question of just how Christian America was at its founding.

So, it is my pleasure to commend to you, Was America Founded as a Christian Nation? by John Fea. A carefully researched book by a professional historian, the book is accessible to lay readers who are interested in finding a truthful answer to the question in the title. Fea is Associate Professor of American History and Chair of the History Department at Messiah College (Grantham, PA). “This book,” Fea writes in a Preface, “should be viewed as a historical primer for students, churchgoers, and anyone who wants to make sense of the American past and its relationship to Christianity. I hope it might be read and discussed in schools and congregations where people are serious about considering how the history of the American founding era might help them to become more informed citizens in the present” [p. xv].

Was America Founded as a Christian Nation? opens with a chapter on what thinking historically looks like. Fea is concerned, he says, “to get Christians to see the danger of cherry-picking from the past as a means of promoting a political or cultural agenda in the present.” He follows this Introduction on historical thinking with four chapters on the long history of the idea that the U. S. is a “Christian nation.” Then six chapters explore to what extent the Revolution was a “Christian event.” Then, before a final brief Conclusion, the book includes chapters on specific founders: George Washington, John Adams, Thomas Jefferson, Benjamin Franklin, John Witherspoon, John Jay, and Samuel Adams.

Fea is a good storyteller, a careful historian, and a scholar who loves the truth too much to indulge in simplistic answers. Was America Founded as a Christian Nation? taught me a great deal, revealed wrong ideas I must eschew, and reminded me that human history is always far richer than we imagine. It also made me realize once again that the American experiment with freedom is both precious and fragile—and that this fragility is threatened when citizens prefer slogans to truth.