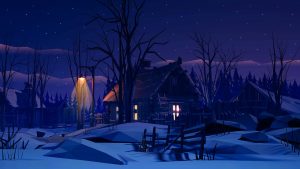 As a child I loved December best of all months. It held the two most important days of the year—my birthday and Christmas.

Everything was good in December. Nights so cold the snow squeaked under foot. Air so clear the glittering stars seemed hung just above the trees. Snow so high it drifted against the windows.

It is easy to forget the irritating parts. The steaming manure that had to be cleaned out of the barn every day after school. The cow that calmly stepped on your frozen toes and would not budge until you screamed and beat her flanks. The metal latches of gates that wouldn’t work until you took off your mittens. Horses that waited for you to leave a gate un­latched so they could lead you on a chase through the drifts. The raw wind that bit your cheeks. (In northern Minnesota, the wind chill index never counted. That was for sissies who lived in towns and cities.)

Even this cold I still loved December. While helping with chores, we fell on our backs into sweet hay. We fell on our backs into the drifts to make snow angels while chop­ping wood for the stove. While the stock tank filled with water we slid on the ice nearby. We badgered our father until he joined us after the milk­ing, playing at hockey on our crude ice rink. He would take on three of us with one of the little kids as his goalie. We played with broken hockey sticks pulled from the snow around the ice rink at school. In the cold black night we laughed until we were breath­less and cried when we cracked our knees and tailbones on the ice. Some­times we froze our ears and cheeks. Once my brother came in with white patches on his cheeks and as he was warming up he yelled; Feel them! Feel them! They’re crunchy! Sure enough. As we kneaded his cheeks the ice crys­tals crunched and broke just like thawing hamburg­er.

When it was time for supper we piled into the kitchen with red and runny noses. The warmth and good smells made our stomachs ache. The youngest, always in a highchair during those years (there were six of us all close in age) expressed how we all felt by screaming for food and banging on the tray with a spoon. My dad gave thanks for the meal and we ate. Venison roast with rich brown gravy, mounds of mashed potatoes, green beans with bits of onion and bacon, coleslaw, fresh bread, milk, chocolate cake with fudge icing.

Diaper Pins and Such

I loved December because we got to shop for gifts—though we always called them “presents.” My brother and I clipped coupons from Reader’s Digest and Woman’s Day. During lunch period at school with a permission slip from home we were allowed to walk “uptown” to the general store where the owner kindly redeemed coupons for money and with it we did our Christmas shopping. We counted the nickels and dimes and pondered what to get our parents. We always got a box of Brach’s Chocolate Covered Cher­ries for my father. He was easy. That used up sixty-nine cents. For another forty-five cents we bought Mom a box of safety pins. We couldn’t wait to see how happy she would be when she opened the package and realized she would no longer have to search high and low for sharp diaper pins! For our little sister we bought a Pretty Mary Glamour set complete with fake lipstick and the most nause­ating cologne ever manufactured. Our two little brothers each got a matchbox car. And we had enough left over to buy ourselves a giant Sugar Daddy which was supposed to be our gift to one another, but my brother, who insisted on safe-keeping my present was overcome by temptation and ate it on the bus ride home. So, of course, I kept his and gave it to myself on Christ­mas.

In December we always had a Christmas program at school. Everyone in the community attended. Grades one through twelve participat­ed. The band accompanied, the choir sang special music, elementary grades sang carols, shepherds tripped on bath­robes, and glitter­ing angels wiggled up the step ladder behind the stable. We said Scripture verses in unison. And one year my classmate, Patty, got to be Mary, the Mother of Jesus, not because of her virtue, (she was bossy and conceited) but because she was cute and Teacher’s Pet. I was jealous because I knew she wasn’t really a Christian. Although I was not so cute I was far more deserv­ing of the honor. I have never forgot­ten this injus­tice. We wore our very best clothes and brought our mother’s and father’s to our classrooms to admire the trees and marvel­ous decora­tions we had made.

Today there are no carols, no Baby Jesus, not even Christmas trees in public schools. I look back and am moved by what we took for granted.

One year our family hurried to get to the program, the boys slathered down their cow-licks with Bryl-Cream and we girls found tights without runs to wear under our dresses. It was way below zero as we drove the ten miles to town. For some reason Dad stayed home that year. (Perhaps the baby was sick.) My mother began to feel overcome with compas­sion for a poor family whose house we passed on the way. She decided we ought to stop and offer them a ride, though where we would put them I didn’t know. There was already enough pinch­ing and push­ing in the back seat. I wasn’t happy about stopping. It would make us late. But my mother insisted. Mom and I went to the door of their tiny two-room shack. The mother answered the door surrounded by children clinging to her legs. She was sick and so were some of the children. There were dirty dishes, unmade beds, clutter, and cold everywhere. We knew the father drank and they had nothing, but I couldn’t have imagined they lived like that. I felt sick to my stomach. Sick that they were so poor and it was Christmas and sick with myself that I cared more about being late than I did about their suffer­ing. They couldn’t come and I was ashamed of my relief.

Many would have considered us poor. But I never thought of it that way. We lived in a tiny three-room house and our family quickly grew to eight. In spite of crowded space and worn furnishings, there was a richness that made other people want to be there. Visitors were astonished when they stepped into our kitch­en. Often there were eight loaves of bread cooling on racks, a giant batch of cookies, and a frosted cake. The house was clean and pleasant, and my parents were gifted in sharing their warmth. 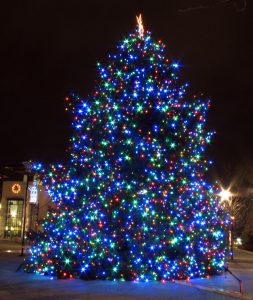 Every year Dad told us we couldn’t afford Christmas and we weren’t even getting a tree—which in our case was free! All we had to do was drive into the forest with tractor and trailer and chop it down. Almost he would convince us. Half worried, half skeptical we eaves-dropped on our parents hoping to hear plans. We were always relieved to hear Mom tell Dad he’d better get a tree the next day. Even during the leanest years our parents managed to give each of us one special gift.

Our tree always glowed softly with blue lights and sparkled with silver tinsel. We loved it so we all vowed we would have one exactly like it when we grew up. When it was first lit we ran outside in the dark to see how it would look through the window. We were sure people would slow down and stare in wonder as they drove by.

On the 23rd of December we waited for our grandparents to come with our presents. They lived thirty-six miles away and always drove a new Buick. We considered them very very rich. Their presents were extravagant and we always got more than one from them.

As the day wore on, my father would tease.

It is going to be twenty-five below. Or worse.

It would be stupid to go out in this kind of weather.

It is going to blizzard.

We helped with the evening chores anxiously watching the sky and the thermometer as it sank lower and lower. Few cars drove by our house that far out in the country. When headlights grew in the distance we prayed over and over, Please make it be Grandpa and Grandma.

At last someone would yell, A Car Is Turning Into the Drive­way! Bedlam would break loose—shouting, running from window to window, laughing, somersaulting off the couch. They had come after all, and loaded with gifts! We arranged them around the tree—shaking boxes, guess­ing, and admiring the beautiful bows my grandmoth­er put on every one. It was still another twenty-four hours before we could open them and our fingers ached to tear off the wrap­pings.

On Christmas Eve Day the hours dragged by so slowly it drove us mad. We could find nothing to do until the boys had to help with evening chores and the girls stayed in to help Mom with Christ­mas Eve supper which was eaten after gifts were opened. All afternoon an enormous ham sizzled in the oven. Home baked-beans bubbled with the scent of sweet molasses. Fresh whole-wheat buns warmed near the oven. Stuffed celery and several kinds of home-made pickles were set out. Best of all were the shiny black olives that gave a little squeak on your teeth as you bit down. We arranged sweets of all kinds: cookies, nut breads, choco­late fudge, and wondered how long we would be tortured with waiting. We tried to remember that Christmas was truly about God sending Jesus to earth, but it was hard.

Grandparents and a few local bachelors arrived around 6:30. The grown-ups visited for a million years, discussing the most boring things. Crops. Hunting. Farm prices. Sick neigh­bors. Recipes. Finally they agreed it was Time. But first the Christmas story must be read though we barely heard the words.

That year my grandparents gave me a gray wool skirt, with a pink poodle appliqued to the front. Its rhinestone eyes gleamed and a leash led from its neck to the waistband. When I twirled, it stood straight out and nothing could have been more fashion­able than that.

This December my prayer is that we have given our own children sweet memories of the kind that so enriched my life.

We pray the same for you.

Bach sums Christmas up wonderfully in that great chorale from his Christ­mas Oratorio:

Break forth, O beauteous heavenly light, / and usher in the morning;

This child, this little helpless boy, / shall be our confidence and joy,

The power of Satan breaking, / our peace eternal making.

In the music you feel that light breaking, penetrating the darkest corners of life with hope. There is mys­tery, for how shall a baby break Satan’s power? But the music ends with power­ful resolu­tion because Bach himself experienced the joy of salva­tion. With him we revel in all Christmas celebra­tions.

Wishing you Peace and Joy,