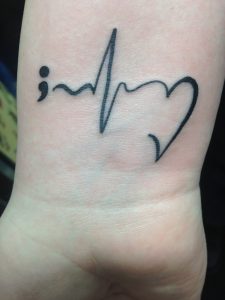 This past weekend Granddaughter turned eighteen – that magic age for getting certain things you have waited for so long to own. It was a good day to get her first tattoo because suddenly at eighteen it becomes a legal birthday gift from Grandpa and Grandma. For a long time she has known what it would be: A semicolon followed by a heartbeat.

She explains it like this: You know how when a writer ends a sentence but then decides to go on writing? Rather than a period, you can use a semicolon. That’s what the semicolon tattoo means – you have decided not to end the sentence but to write another and go on living. I heard her telling the tattoo artist what it meant and I was pleased by his sincere response. He liked the image and thought it had great meaning, but he wanted to give her some advice and I heard him repeat it at least two times. “Remember,” he said, “Suicide is a permanent solution to a temporary problem.” The phrase was rather like a sound bite from a therapist or the title of a Ted Talk, but what an unlikely setting! I guess I don’t need to say my heart was grinning from ear to ear as I listened to this exchange.

Suicide: a permanent solution to a temporary problem. 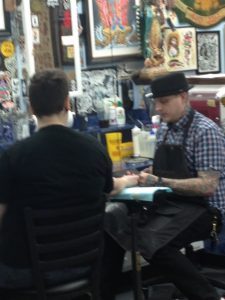 I have always believed that for many tattoos hold a special meaning and purpose for the person who has them. The painful procedure that accompanies a tattoo can be a signal, a sign, that I am alive. I am not numb to life. (I’ve heard young people talk about feeling numb to the world, of wondering if life is an illusion or worth living.) Physical pain can actually stir hope in someone whose life has been filled with difficulties or depression. A tattoo can be a permanent reminder of an event or a love that imparts deep meaning. It tells the world “I have survived.” It is a reminder to the self to go on living even when things are hard.

Living with Granddaughter and loving her has been, in many ways a gift to us – a reminder of how difficult life can be for a young person and how thankful we are to have the place and space for her. But the next tattoo? Hers to pay – altogether.