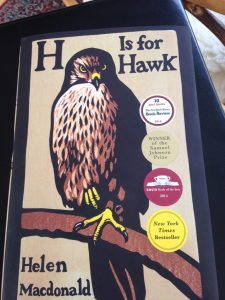 H is for Hawk. By Helen Macdonald. This book has been winning awards and is wildly popular. As often is the case, I’m late to the party. But now I’m glad to have read it.

When Macdonald’s father died no one anticipated it, least of all Helen. In her grief she went a little crazy. As a child she was fascinated by birds of all kinds, but especially the predator birds – hawks, merlins, falcons, kites, kestrels. As an adult she learned how to train and fly some of the smaller species, but never the goshawk which is considered one of the most aggressive and difficult to train. Hawks, especially goshawks, are not pets in the way of dogs or cats, they remain ultimately wild and untamable. Intent on murder and blood, with their enormous talons and sharp beaks, they are perfectly, awesomely equipped to kill rabbits and pheasants. So in ways it felt natural to turn to the challenge of training Mabel, a young goshawk, in the hope that it would take her on a distracting journey out of grief. As the weeks passed she sank further into depression, withdrawing from friends and family, and identifying more and more with her goshawk. Until…

It seems to me that the entire book could be summarized in this one paragraph. Don’t worry it’s not a spoiler – there is much more to the book that is fascinating: falconry –   what is required to train a hawk to fly free and then return to the gloved fist and Macdonald’s reflections on the layers of grief and the ways it manifests itself. As a research scholar at Cambridge, she was well equipped to write this book and also had the creative skill that makes it a good read.

So here was the pivot – the wisdom garnered:

“All the way home on the train I thought of Dad and the terrible mistake I had made. I’d thought that to heal my great hurt, I should flee to the wild. It was what people did. The nature books I’d read told me so. So many of them had been quests inspired by grief or sadness. Some had fixed themselves to the stars of elusive animals. Some sought snow geese. Others snow leopards. Others cleaved to the earth, walked trails, mountains, coasts and glens. Some sought wildness at a distance, others close to home. ‘Nature in her green tranquil woods heals and soothes all afflictions,’ wrote John Muir ‘Earth hath no sorrows that earth cannot heal.’

Now I knew this for what it was: a beguiling but dangerous lie. I was furious with myself and my own unconscious certainty that this was the cure I needed. Hands are for other human hands to hold. They should not be reserved exclusively as perches for hawks. And the wild is not a panacea for the human soul; too much in the air can corrode it to nothing.”

In a time when many believe that nature heals all afflictions, I admire Macdonald for bravely stating it does not, although I doubt she would call it brave. Because my roots grew out of a remote and rural place in northern Minnesota, I admit I’ve often been beguiled by the beauty of wild creation that can give a restorative perspective not found in an urban setting. At times in life I’ve been certain that leaving for the wild, perhaps forever, is what I need for calm and focus, but she’s right, the earth simply cannot heal everything. It cannot replace the community we were made to live in as human beings. We need relationships. It cannot heal all our sorrows – only God is able to do that even though we know not everything will necessarily be put to right until Jesus returns. So we wait for it in the now, but the not yet time. Meantime, I’m not quitting my jaunts to lonely places because they often serve to rephrase life, but it is good to remind your soul that those beautiful lonely places won’t deliver everything you need.