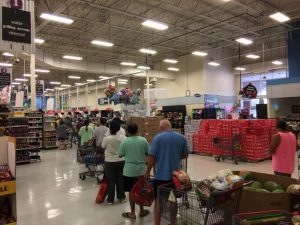 As I walked into the nursing home where my mother lives, I was aware of being behind. Traffic was heavy—both an accident and construction were fouling things—and there were still several more appointments on my to-do list. It is a lonely place, and desperate eyes hungry for human contact followed me down the hall. I’ve met some of the residents in those wheelchairs. More accurately, I meet them repeatedly when I visit, for they do not remember. I am always keenly aware of how I cannot meet their needs, or restore their minds or grant them release from bodies decaying rapidly towards the moment of their death.

And so I walked briskly, eyes forward, to my mother’s room. And just before reaching her door it dawned on me that I was a walking curse. It would not have hurt me to smile and say words of happy greeting as I walked, and it need not have slowed me down.

Moment by moment I live as a blessing or a curse, in both the big decisions I make and in the tiny ones. The tiny one in the nursing home haunts me as perhaps being big for those whose consciousness is narrowing relentlessly to a pinprick, and then to a great unknown.

For he did not remember to show kindness,
but pursued the poor and needy
and the brokenhearted, to put them to death.
He loved to curse; let curses come upon him!
He did not delight in blessing; may it be far from him!
He clothed himself with cursing as his coat;
may it soak into his body like water,
like oil into his bones!
May it be like a garment that he wraps around him,
like a belt that he puts on every day! [Psalms 109:16-19]

It is an ancient problem. The dark preference for belittling, criticizing, name-calling, and cynicism is rooted deep in our hearts because such things make us feel like a winner. And when leaders engage in such cursing a spreading darkness descends on the land, and those that are weak and powerless and voiceless have reason to fear.

The Hebrew psalmist is not being vindictive but realistic. If we bless, blessing gathers to us, and the same is true if we curse. How I walk down the hall in the nursing home doesn’t just express my heart but helps to shape it.

One of my errands was at the bank. In front of me was an older woman who waited patiently to reach the teller. Only when she reached the window did she begin digging in her purse for the check to be deposited, and then rummaged further to find her checkbook for a deposit slip. It was the wrong checkbook, so she rummaged more and finally found what she was looking for. Then the check needed to be signed, and the deposit slip filled out. And then there was renewed rummaging because she had another transaction to accomplish. After the second transaction was completed she rummaged again to find the correct checkbook, record the deposit, and then to find a little coin purse in which to place the carefully folded receipts. Then, after warmly thanking the teller, and greeting me, she went on her way.

As I waited my heart was not full of blessing. I am a slow learner. What I learned in the hallway of the nursing home did not translate to the bank.

But I need to learn it. I need to learn it because to be a blessing and not a curse is part of faithfulness to my Lord. And I need to learn it because when leaders pursue the poor, when they love to curse rather than to bless, divisions deepen, the “other” is made a scapegoat, and the fragility of freedom is threatened. “A curse devours the earth,” the prophet Isaiah said, “therefore the inhabitants of the earth are scorched” (24:6). At such moments in history the need for healing and reconciliation—of blessing—is deepened.

The last I checked, healing and reconciliation are part of the calling of the people of God, to be accomplished by those for whom blessing is a habit of the heart.