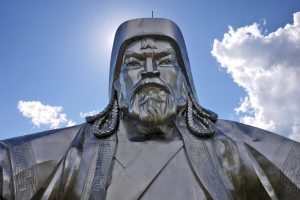 One of the reasons I find the Christian faith so compelling is that it is a Story that makes room for stories. We can’t live without stories, unless somehow we imagine we can live without meaning. When I saw a preview for the film, Mongol, I realized my utter ignorance of the man who ruled over an empire that stretched over far more geography than Rome ever came close to conquering. So, I read Genghis Khan: Life, Death, & Resurrection by John Man, and was fascinated by the deep truth contained in the ancient Mongol story of: “How Tales Originated among the Mongol People”:

Once upon a time, plague struck the Mongols. The healthy fled, leaving the sick, saying “Let Fate decide whether they live or die.” Among the sick was a youth named Tarvaa. His spirit left his body and came to the place of death. The ruler of that place said to Tarvaa, “Why have you left your body while it is still alive?” “I did not wait for you to call me,” he replied, “I just came.” Touched by his readiness to comply, the Khan of the Underworld said, “Your time is not yet. You must return. But you may take anything from here you wish.” Tarvaa looked around, and saw all earthly joys and talents—wealth, happiness, laughter, luck, music, dance. “Give me the art of storytelling,” he said, for he knew that stories can summon up all other joys. So he returned to his body, only to find that the crows had already pecked out its eyes. Since he could not disobey the Khan of the Underworld, he re-entered his body, and lived on, blind, but with the knowledge of all tales. For the rest of his life, he traveled across Mongolia telling tales and legends, and bringing people joy (p. 17-18).