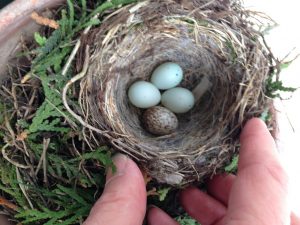 This week a handyman finished repairing holes in the siding of our house. A woodpecker hammered away until there were three holes large enough for chickadees to nest in. This is not a joke. They actually did. If you timed it right you could see a parent returning with little green worms and if you listened closely you could hear the ecstatic cries of the babies when dinner arrived. It was an odd thing to see a chickadee perched on the hole’s edge, its head poking out the side of our house. Whether advisable or not, we waited until they moved out before the work was done.

We are a little obsessed with bird-watching around here and learn all kinds of life lessons from them. Not that I take to the woods with binoculars. No. I’m too fat and lazy for that. We have extremely popular feeders on our deck so all I need to do is sit at my desk sipping coffee and twist my neck to watch. I try not to get too distracted by the constant commotion outside my window, but the other day I was disgusted by something I’d never seen before – a tiny song sparrow feeding a baby bird about four times her size. The baby was fluttering its wings as young ones do while the exhausted parent flew back and forth to the feeder, grabbing seeds and popping them in the demanding open mouth. Back and forth, over and over. I was witnessing the perpetrator of a malicious crime. Slavery. A murderer of sorts. An imposter. Pig. And here was a mother who didn’t even know this was not her own child.

This was a purple finch (little larger species than song sparrows) nest we found on our porch some time ago, but you can see the cowbird egg which is larger and a mottled brown. I removed it returned the nest to the rightful owners.

The baby was a young cow bird whose mother had spied the innocent song sparrow’s nest a month or more ago and stealthily laid her own fat egg among the tiny sparrow eggs. The cow bird can’t be bothered to hatch her own eggs and instead sneaks into another bird home and leaves a fake. And it isn’t like the hatchling joins the rest of the brood thankful to be fed, thankful to be anywhere at all – it always hatches first – ugly, (okay all baby birds are ugly, but I’m annoyed here) blind and featherless, and then it commits fratricide by pushing the other eggs out of the nest to destroy all competition. You may not approve of this, but my husband set the foster mother free by dispatching the imposter.  It’s one thing to hear David Attenborough talk about certain disturbing aspects of bird life, but altogether a different thing to witness it firsthand. I love metaphor and this was so flagrant I had to reflect on it.

I don’t know if you’ve ever found yourself far gone down a road you had no idea would end up severely depleting or even destroying your assets? Or health? Or family? I once nurtured a multi-level marketing company thinking it could make me, if not rich, then able to purchase “extras” like Calphalon cookware, percale sheets and massage therapy. I loved the product and invested a lot of money trying to make sales only to learn that as the months passed with little to show for my effort, it became clear I was the worst salesperson on earth. This was not becoming the nest egg I’d hoped for because I couldn’t bring myself to tell you how much good this skincare line could be for your flaky, pock-marked face. But I continued feeding time and money into the maw of the business hoping it would get better. Gradually, I fell into discouragement and guilt, but for several years I was afraid to quit. How could I admit such failure to my husband who had supported this risk? How could I make up the lost dollars? Finally, I told him how much I hated sales and how sorry I was for the wasted money and how afraid I was to stop feeding this monster in my life because I’m not a quitter, but what could I do? Then came one of the most wonderful proofs of grace in my life. He said – “Stop doing this. Let it go and don’t worry about it. It’s a valuable thing to try something out to see if it will work and to find out it doesn’t. You didn’t know this wouldn’t be your thing. So let it go.” I quit immediately and I’ve never forgotten the love he demonstrated in walking through that with me. Epilogue: we’ve seen another batch of song sparrow babies that are genetic offspring. Definitely. I even imagine I’m hearing happier songs. 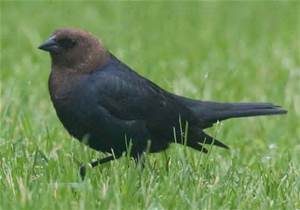