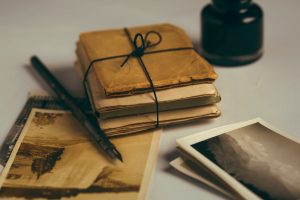 Margie and I have been talking recently about what we call our new normal. We’re aging, which is no surprise since we’ve been doing that since birth, except that the process seems to be getting a bit more intrusive. The intrusiveness has been very annoying.

Actually, it isn’t just aging that introduces us to a new normal. Changes do the same at any age. A change in vocation, the suicide of a friend, the decision to move, the arrival of a baby, a sudden flood, the discovery of mold in the walls, the fragility of a once confident faith, a graduation—all these and more usher us through a metaphorical portal out of what used to be our normal into what is for us a new normal.

Sometimes the new normal is highly anticipated and exciting, and sometimes it is not.

At the same time we’ve been discussing this I’ve been reading a novel recommended by my rector. We were sitting together at a recent church potluck where by the time I got through the line my wife’s offering of green chili flat enchiladas had been eradicated. As an introvert I’ve never been particularly fond of potlucks, but missing the enchiladas after having smelled them baking that morning meant I had something to mention in next week’s Confession. In any case, Christian asked if I had read Amor Towles’ A Gentleman in Moscow (2016). I said I hadn’t; he said I must, and added it was good enough that we should consider hosting a book discussion. So, since I always do what my rector says, I ordered a copy and began reading it. The book is an utter delight—I’m already fearful of reaching the final page.

But I’ve gotten off track—my topic is a new normal.

A Gentleman in Moscow, set in 1922, is about Count Alexander Rostov who is placed under house arrest by the Bolsheviks in the Hotel Metropol. Talk about a new normal: a wealthy Russian aristocrat, a world traveler is suddenly reduced to living entirely within the walls of a single building. Not only that, but when Rostov returns from his interrogation in the Kremlin, he discovers the Bolsheviks, not content to restrict him to the confines of the hotel have ruled he must move from his suite into a tiny, cramped room in the attic. Granted, the Metropol is a grand old establishment and contains just about everything anyone could want, but still the Count’s new normal is a far cry from his former life. From a life of meeting with movers and shakers, visiting galleries and the best restaurants, having tea with the best and the brightest, of travel and balls and comfort Rostov has been stripped by Russia’s Communists to an existence of bare essentials. And what’s fascinating is that he accepts his new normal with complete equanimity.

As he is moved out of his suite he is forced to leave behind several rooms full of furniture and art that had been in his family for generations. They were all very lovely things, full of sentimental value, to say nothing of their monetary worth. “But, of course,” the Count thinks, “a thing is just a thing.” He chooses a few items to take with him to his attic room, and then “looked once more at what heirlooms remained and then expunged them from his heartache forever.”

If that sounds implausible you have not met Count Alexander Ilyich Rostov. It’s called contentment, and it’s a virtue Rostov has nurtured until it’s become a habit of his heart.

Our new normal involves very different circumstances and has not been met with either equanimity or contentment. I’ve become less steady on my feet and find that using a cane helps me maintain balance. (I fell again, a sidewalk face plant, this summer.) We can accomplish less in the same amount of time. Margie is unable to work in her garden like she used to. (She’s only planted tomatoes and cucumbers this year.) Her arthritis is worsening (she was allergic to the last, very effective drug) and is even thinking of giving up her beloved hens. And so it goes.

Having a new normal is well… normal for finite creatures, but that doesn’t always make it easy. Depends on the habits of the heart we have nurtured, or not, as the case may be.

Photo by Joanna Kosinska on Unsplash