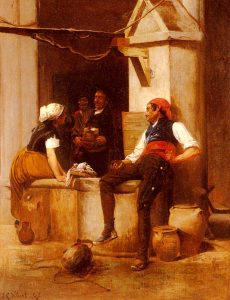 “Attention,” Gregory Wolfe, the editor of Image says, “is a form of currency. And it’s in limited supply.” It’s a striking metaphor, perfect for a consumerist society. When I pay attention to you I am implicitly conferring value, confirming that you are worth my time and energy, my undivided focus when so many other things clamor for my notice. Wolfe is correct: it’s in short supply.

It doesn’t help that paying attention is complicated. You may prefer to be left alone, for whatever reason and see my attention as an unwanted intrusion. Being paid attention can be an impersonal tool of management to make you feel significant without granting any meaningful significance. You may crave attention, and need it, but just not from me. Or I might be so wearily drained as to not be up to paying much attention to you. I may be fearful because we are different and so giving you my attention is discomforting. I may be too distracted. And many of us are out of practice, trained by social media and fast-paced living to give scant attention to everything and everyone.

Most of the attention we receive isn’t really attention, but merely divided notice. You tell me our conversation is important but with every glance at your vibrating cell phone I know its importance is no greater than your attention to every stranger who happens to own a device capable of contacting you. Wanting to have it both ways we devalue our attention and the loss is registered even if it’s a subconscious deficit.

And then there are the social structures that keep us apart. Hillbilly Elegy by J. D. Vance is a memoir, the intimate story of a man who grew up in Appalachian poverty to graduate from Yale Law School. It’s a story of class in America, a deeply rigid gulf distinguished by divergent cultures, wealth, opportunities, faiths, values, expectations and loyalties. Vance loves his hillbilly family, and writes with eloquent and compassionate honesty of their brokenness and their glory. He bridged the social structures that exist between the middle class and the working class, and in reading his story I learned a great deal about my own. Vance shows how American society is structured to exacerbate rather than heal these socioeconomic and racial divisions, making our attempts to pay attention across them more difficult—seemingly impossible—instead of easier.

One time, Luke tells us that on the Sabbath Jesus went to synagogue and stood to read aloud a text from the prophet Isaiah. “And he rolled up the scroll,” Luke says, “and gave it back to the attendant and sat down. And the eyes of all in the synagogue were fixed on him” (4:20). I’ve always wanted to be known as having sufficient wisdom that people would be eager to pay attention when I am about to speak. I should have been more concerned about learning how to pay attention to my neighbors, especially those most unlike me.

Paying attention was the greatest gift I received from Francis Schaeffer. In the months I was with him we talked about many things, but I only remember tiny fragments of what he said. What I do remember is that when I was with him there was never any doubt that I had his full attention. It wasn’t because I was asking brilliant questions—many times he had to ask me to clarify what I was trying to say. It was because he really believed everyone made in God’s image was worth his undivided attention.

I cannot solve the deep divisions in America that Vance highlights. I hope that the people of God will be those who pay attention, real and undistracted attention, to our neighbors, but I can do nothing significant to make that happen. I can, however, by God’s grace be determined to increase my currency of attention and be prodigal about spreading it around, in the ordinary moments of my life. Please pray I will do so.

Source: Gregory Wolfe in an informational email (2017) from Image Journal.