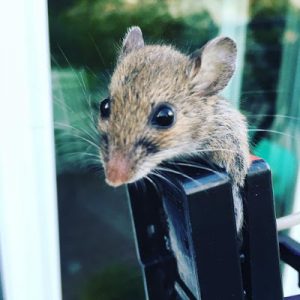 I open the silverware drawer and notice little black grains and wonder who dropped dirt among the forks. Bits of bacon? Wild rice? Not mice feces again!

The glories of fall with cool temps and blazing trees must alert rodents it’s time to find a winter home, and with our entire tribe in tow, why don’t we enter this promising house with a perfect entrance through the kitchen exhaust fan? Why not? Because I am going to tell people how to stop you!

Mice, I admit, are rather cute with their shiny black eyes and fuzzy gray faces. No one knew this better than children’s author Beatrix Potter who wrote mouse stories that could warm the most cold-hearted adult. Who doesn’t love Tom Thumb and Hunca Munca, the mouse couple who angrily destroy a doll house because all the food is fake but then return in repentance with a broom and dustpan to sweep up the damage? If only!!

I’m not afraid of them, like some, or viciously calculating like others armed with a cookie sheet ready to flatten it the next time it appears. (Futile remedy, Andene.) Okay, I did have one encounter that made me scream. But I was in no position to protect myself since it ran under the bathroom door while I was temporarily indisposed.

When they begin to lick the butter you left on the counter, don’t tell me to get a cat.  My daughter’s cat has always preferred licking butter to catching mice, which leave their little black rice kernels on the dinner plates, nibbles on the cracker box and holes in the cornmeal sack – it’s time to declare war.

We have tried various ways of capturing them including live trapping with the benevolent plan of releasing them some where wonderful like the wealthy neighborhood next door. But they just seem to prefer slumming at my house. The old-fashioned bend-the-spring-back-and-hook trap only succeeded in trapping my fingers as the latch is so touchy. Mice despise this trap, disarm it with ease and leave with the bait. They may be cheap, but don’t bother. Poison is bad for two reasons. If a mouse eats it and dies and your cat finds it thinking what a yummy little snack, she might eat it and die, too. The second problem with poison, though some deny this, is that upon eating a shit-load of bait the mouse makes his way back to his nest somewhere in the bowels of your house and feeling very sick to the stomach curls up and dies. Then as nature does her work the mouse begins to decompose. The scent of rotting flesh emerging from such a small creature is alarming. We know from experience. That dreadful smell emanating from our basement infused the rest of the house and lasted until the blue bottle flies appeared (you know what was going on there!) It could make a monk curse. Slowly it dissipates and disappears after a few weeks. Meanwhile all our frantic searching in cubby holes and pipes never revealed the dead corpse.

My secret to fighting mice is simple and cheap. Go to any hardware store or a place like Menards and purchase four or five JAWZ OF DEATH traps. They should cost more than five dollars apiece. This is the best weapon ever. You load the little basin under the trigger with peanut butter, pull back the JAW until it clicks and carefully set it down. Then scatter a few grains of oatmeal. Not many. You want it to be an appetizer or an amuse-bouche, a little mouth teaser as the French say, before the mouse tucks into the main course. Then WHOMP – instant death. Fast, accurate and deadly. This is almost humane, don’t you think? And his last thought will be a pleasant one – the surprise of finding something so tasty right in his path on the way to the kitchen? Bonus! Disposal is so easy – no touching dead thing, just hold over trash can and squeeze open and down it drops. Most of the time you don’t even need to re-bait.

With JAWZ in place you can climb down from the safety of your stool and confidently put away the cast iron skillet you were going to throw. This is my best advice for autumn. For free. Lucky you.