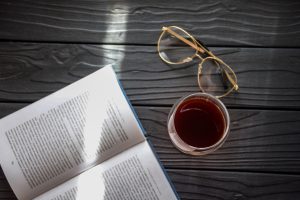 Gratitude is hard to learn, as any parent will tell you. Sometimes I hesitate before giving some treat to a child because I know what will happen next. A parent will instruct them to “Say thank you,” and they’ll look pained and mutter the appropriate words with what appears to be minimal conviction. Sometimes the parent will apologize, but I always insist they shouldn’t. Gratitude is hard to learn and too often as an adult I’ve said the correct words but that’s as far as it went. Once I learned the proper formula, I discovered I could ignore my ungrateful heart.

I’ve been noticing how outrage kills gratefulness. I have no double-blind research data to back that up, but my experience confirms it. If I make a simple graph, one line being amount of news and social media consumed and the other the amount of spontaneous gratitude felt for small blessings, I’m left with a simple giant X. As the first (outrage) increases the second (gratitude) is threatened with not just diminishment but extinction.

It’s complicated by the fact that much of what I am grateful for is relatively rare in our world where goods are unfairly distributed because systemic injustice and individual greed has so badly skewed the vaunted invisible hand of capitalism. Like hot showers, indoor plumbing, fresh salad greens out of season, more books than I can actually read, affordable wine, woods with wild turkeys, deer, fox and a host of songbirds outside my office windows. When anxiety is fanned by some outrage in the news it’s easy to forget them. My focus has been shifted.

There is a deeper level as well. I want to be grateful for small things, the little blessings that are easy to miss because they are so ordinary, so unexpected, or so often received I forget that I don’t actually deserve them. They are precious when noticed but must be noticed and that takes a mindfulness that everything around me tries to disrupt. “Bless the Lord, O my soul, and all that is within me, bless his holy name!” David tells himself (Psalm 103:1-2) “Bless the Lord, O my soul, and forget not all his benefits.” It’s like he’s taking himself by the scruff of the neck and shouting, “Do it!” I need a similar reminder.

There are more enemies of mindfulness than outrage and distraction; the values of the idol of Consumerism, efficiency and productivity, are equally effective. The urgent supplants the important, and busyness can make the pace of life too quick to notice the tiny graces that appear momentarily at the edges of our consciousness. Sometimes they initially appear as interruptions and only on reflection reveal their true nature.

Thanksgiving 2
On Thanksgiving, the phone
suddenly stops working. For this, too,
Lord, we give thanks.

I don’t understand my secular friends who tell me they express gratitude to the Universe. They say it isn’t so different from praising a God that exists only in my imagination. I understand that argument but find it uncompelling. I also realize it isn’t for them primarily a cognitive issue and so remember the final apologetic is love.

My love for them, yes, but also my love for the personal infinite God that is really there. Corporate worship is, among other things, an expression of gratitude to God before a watching world. And that watching suggests that we need to step back and ask, “What would a visiting unbeliever see in our worship? Will they be moved by the authenticity and depth of our gratitude for God’s grace in a broken world even if they disagree with some of what they hear?”

Outrage feels powerful and transformative while gratitude requires humility and a gentle thoughtfulness. Superhero movies get exciting when the protagonist goes on a rampage, but they slow down when a character pauses to express thanks.

“I would maintain,” G. K. Chesterton said, “that thanks are the highest form of thought, and that gratitude is happiness doubled by wonder.” That may be true, but gratitude is still hard to learn, even over a lifetime. I’m coming to see I haven’t mastered it yet. I hope I do, someday.

Source: The excerpt from “Thanksgiving 2” is by Jim Moore (2011). It arrived, to my delight, in my inbox on November 28, 2019 via Pome by Matthew Ogle (pome@mattogle.com). “Pome: Short modern poems for your inbox, because it’s dangerous to go alone.” G. K. Chesterton online

Photo by Catia Climovich on Unsplash