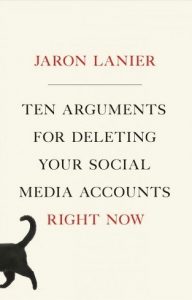 In a New York Times review of Jaron Lanier’s book, Ten Arguments for Deleting Your Social Media Accounts Right Now, which I have not read, Franklin Foer makes the case that Lanier knows what he is talking about.

“Over the past year, a backlash against the big tech companies has arrived suddenly and unexpectedly. But Lanier has been there for a long time. During the 1980s, he helped invent virtual reality. Because of his immersion in technology and his integrity as a thinker he saw the perils of corporate concentration in technology before most; he knew that the data amassed by these companies could be used to exploit the psychic weaknesses of users.”

Lanier has published incisive essays and articles on the topic, as well as two books, You are Not a Gadget (2010) and Who Owns the Future?(2014)—none of which I have read, proving I am not as well read as I think I am.

In Ten Arguments, Foer says, Lanier reviews arguments he has made before and that need repetition because of their importance. We tend to think of social media as simply one more tool that we can use and then set aside until it’s needed again. A hammer, say, that is useful to repair the bird feeder that fell off the hanger on my deck. I repair the feeder, and then put it back in my toolbox where it might not see the light of day for another month or more. Lanier insists social media is most definitely not like that—hammers are not addictive and the companies supplying hammer updates don’t work hard to find ways to make them even more addictive.

And then, Foer says, Lanier makes a new argument worth considering.

“Many of his criticisms of social media will feel familiar to distant observers of American politics. Twitter and Facebook have made us cruder, less empathetic, more tribal. Only at the very end does Lanier venture into new territory. His argument, however, is a profound one. He worries that our reliance on big tech companies is ruining our capacity for spirituality, by turning us into robotic extensions of their machines. The companies, he argues, have no appreciation for the ‘mystical spark inside you.’ They don’t understand the magic of human consciousness and, therefore, will recklessly destroy it.”

Not having read Lanier, I have no idea as to what he means by spirituality or mystical spark, but I don’t think I need his definitions to say I agree with his observation. There is in the capacity for awe, love, beauty and relationship something profoundly human that brings us to the interface between the natural and supernatural parts of reality. One’s worldview may cause us to misinterpret what we are experiencing but the reality of the experience is identical.

At the very least social media works tirelessly against the need to be still and to wait in stillness in order to know God. It interrupts unhurried conversation and slow leisurely meals. And since it is intentionally addictive social media works its decay progressively into our souls while we excuse our choice as merely using a tool that helps us be efficient and productive.

By the way, after reading Lanier’s book Foer deleted his Facebook account. Now, what am I going to do?