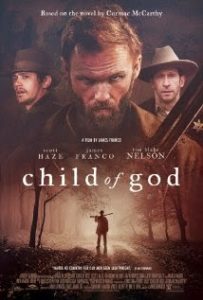 Child of God (1973) is Cormac McCarthy’s most disturbing book, and the film is hard to watch. The story is of Lester Ballard (played with an uninhibited intensity by Scott Haze) who, deeply traumatized, marginalized and disturbed descends into increasingly violent depravity. We first meet Lester when an auctioneer, accompanied by a band and pickups full of eager buyers and on-lookers pull up into his family’s farm that has been repossessed by the county and now is to be sold off. “To watch these things issuing from the otherwise mute pastoral morning is a man at the barn door,” McCarthy writes. “He is small, unclean, unshaven. He moves in the dry chaff among the dust and slats of sunlight with a constrained truculence. Saxon and Celtic bloods. A child of God much like yourself perhaps” (p. 4).

James Franco, who directed the film, co-wrote the screenplay and plays a minor role, makes certain we hear that description of Lester. That is good because it is the essence of what McCarthy is trying to say to a culture that wants so badly to be hopeful about the promise of future technological, economic and educational advances and finds that to maintain that hope it needs to explain away the evil and brutality that maddeningly will not disappear quietly into the past of human history.

I can’t simply recommend this film, since it is far too raw and brutal for that, a story of murder, rape and necrophilia that like the novel is determined that we face human depravity in all its horror. Some will want to watch this film, and for the rest there are good reasons to decline. Though the film is unfortunately choppy (due to the editing), it contains some very strong performances—by Scott Haze as Lester Ballard and Tim Blake Nelson as the sheriff—that may garner attention if not awards. The landscapes, sets, and cinematography are also remarkable, so that the rough rural woods, small towns and hollows of East Tennessee seem to take on a darkly foreboding cast. As usually occurs when novels and made into films, a key scene in the book is skipped in the movie, a flood that becomes a metaphor for divine judgment.

Watch the film with care. It speaks truth, though the truth it depicts is neither pleasant nor easy. I hope Child of Godprompts my non-Christian neighbors will think deeply about the human dilemma and about how the stubborn existence of evil in human affairs and hearts will not be solved by reorganizing society, expanding opportunity, and providing treatment. A far more radical solution is needed. And I hope my Christian neighbors will join me in reassessing how easily we reduce evil to embarrassing sins rather than owning it as the deadly power that seeks, every moment, to devour our souls and fill us with darkness.