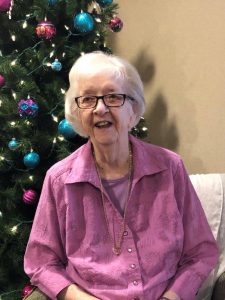 As I wrote this post it happened to be during Holy Week. After a difficult few days when Denis’ mother suffered a nosebleed that couldn’t be stopped and grew gradually weaker until she passed from this life into the next, we had gathered at her bedside to touch her, console, and pray for her. Our friend and former assistant, Anita, was also present. Mom had not been responsive or talking, but when Anita bent over her, held her face in her hands and said, “I love you.” She opened her eyes and clearly whispered, “I love you, too.” Those were her last words.

More than ever when a loved family member goes home it lends deeper meaning to the celebration of Easter, of Resurrection Day.

It seems appropriate to let Denis tell you about his mother’s death in his own words. He writes:

A few minutes before midnight on Ash Wednesday my mother died, passing from this life into the next. It was not unexpected, and she was ready. Her dementia was deepening, she was growing weaker physically, and she was becoming increasingly aware of how her memory was failing her. Thankfully my sister was able to be here so those who loved her were with her in the end. Still death is a horrible thing, and the full burden of that horror weighed on us as we waited by her bedside in the days leading to her passing.
“We are born, we eat, and learn, and die,” writes Michael O’Brien in his novel Island of the World. “We leave a tracery of messages in the lives of others, a little shifting of the soil, a stone moved from here to there, a word uttered, a song, a poem left behind. I was here, each of them declare. I was here.”
The traces mother left are faint because she was never allowed the freedom to be herself. Always in the shadow of first, a domineering mother and later, a controlling husband, my memories of her always seemed to unfold on the edges of life. Away from the limelight we made each other laugh with jokes spiced with sarcasm, and though not a reader herself she seemed to understand my passion to get lost in stories. She shaped me, and she did so primarily with love.
Now in the presence of the One who sees her as significant, her life can be appreciated in ways that are gracious rather than legalistic. And being remembered for love is not a bad legacy.

We know that as life proceeds each one of us will likely face the death of some person we have loved. And so, our prayer for you is that the Hope and Joy of spring will ever be a Consolation and a reminder that the story is not over.