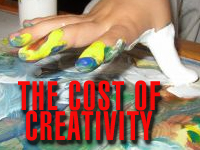 Some people are good at catchy titles and headlines, but I am not. I complained earlier this week over the effort it took to come up with titles for some talks I will be giving. I want the titles to be descriptive yet creative and attractive, and achieving that is not always easy. It can also take an amazing amount of time.

Which reminds me of a catalog for a community education program I happened upon when Margie and I were traveling along the northern shore of Lake Superior. One entry was for a Woodworking class called, “Build Your Own Casket.” What had caught my eye was a quote used to advertise it:

“None of us are getting out of this alive, so you might as well bury yourself in your work.”

Now, I have little interest in woodworking and no place to store a casket, but that quote was enough to tempt me to sign up.

I find that it takes me as long to develop the creative aspects of a talk (titles, stories, PowerPoint presentation) as it does to write the talk itself. When I speak on film, I spend hours choosing which scenes to show. Creativity costs, in other words. It costs time and effort, and both tend to be in short supply in our busy, fast-paced world.

It is this cost which can tempt us to concentrate on the content and forget the process, making sure things are true and good at the expense of making them beautiful. To some extent at least, it could be argued the evangelical church in the West has tended to strike that bargain over the past century or so. It’s a losing proposition from a biblical perspective.

The Scriptures reveal that God who is both true and righteous is also glorious beyond imagining. The Redeemer and King is also Creator, and we have been made in his image. When he called the cosmos into existence by his eternal word, he made it a riotous display of colors, textures, shapes, and sounds. And then he called it Good, in case we might have doubts about it. And when the Second Person of the Trinity entered our world, he came as a story-teller.

With such a divine investment in creativity, my complaining is a measure of worldliness, a commitment to efficiency and productivity which may make sense in terms of the Industrial Revolution but is contrary to a Christian view of things. Both the process and the content matter, and they matter because God exists.

A special meal served on special plates, with a few flowers and linen napkins (in a fast-food world). A letter written with a fountain pen on home-made paper (in place of an email). A play read aloud in a living room lit by candles, each guest given parts marked on the script (instead of going to a movie). A talk which is not only true but creative (instead of everything sounding business-like).

All these things take time and effort. They are all costly. So much in our post-Christian culture leans against them. And part of Christian faithfulness means saying No to the world, and Yes to the glorious grace of creativity. Not just for artists, but for all God’s children, across all the ordinary things of life.