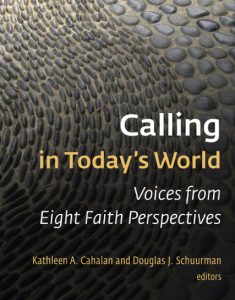 “Vocation and calling, the editors of Calling in Today’s World note correctly, “are Christian concepts. They do not appear in other religions” (p. xi). However, since we live in a pluralistic world, Kathleen Cahalan and Douglas Schuurman invite representatives of non-Christian religions to reflect on these Christian concepts from the perspective of their faith commitment. So, besides a chapter on the Catholic (Cahalan) and Protestant (Schuurman) Christian perspective, there are chapters written from a Jewish, Moslem, Hindu, Buddhist, Confucian & Daoist, and secular perspective.

What is fascinating about Calling in Today’s World is that it invites non-Christians to reflect not on an aspect of Christian belief that is a scandal to non-Christians—e.g., the Trinity, the incarnation, the cross, the exclusivity of Christ’s claims—but on a teaching that non-Christians can admit is both practical and admirable. Our view of human work is crucial if for no other reason that it takes such a large slice of our time and energy. The ancient pagans believed that the gods disliked work and so brought the human race into existence to do it. Modern consumerism is little better, seeing work as mere survival and workers as nothing more than a resource to be used to increase profit. The Christian belief that our lives are significant in the cosmic scheme of things, that our work is pleasing to God, and that he calls us to it is a teaching that brings healing and hope into a world where injustice, toil, and economic uncertainty are the order of the day.

I’ve long believed that the Christian thinking on calling and vocation is essential to Christian faithfulness. It is impossible to speak seriously about human flourishing without it. I had not thought enough, however, about it in terms of apologetics—in terms of commending Christian faith to non-Christians—but Calling in Today’s World demonstrates this doctrines’ apologetic power. Though it needs to be done without hubris or triumphalism, a quiet consistent witness to one’s calling and vocation before God is a powerful way to share how the biblical worldview is deeply satisfying to human beings in a broken world.

The editors “invite” the reader of Calling in Today’s World “to appreciate what other traditions have to offer and to support each other’s sense of calling” (p. xiii). Fine and good—my non-Christian neighbor should be supported in the work of their hand and mind and imagination and I am eager to do so. But it also seems reasonable to listen to each faith tradition carefully as they reflect on this topic in order to ask some serious questions. How does one’s deepest beliefs explain how our work matters? Surely any faith tradition that cannot account for work’s true significance needs to be thoughtfully and graciously challenged. The biblical worldview provides a perspective that should be considered. It is one more reason why the claims of Christ in the gospel are worthy of belief.

One weakness—and it is a serious fault—in Calling in Today’s World is that it is tone deaf to the rich contributions to the topics of calling and vocation provided by evangelical Christian thinkers. Significant works like The Call by Os Guinness (1998) and Visions of Vocation by Steven Garber (2014) go unmentioned, even in footnotes and lists for further reading, and the book is poorer for the oversight. Guinness and Garber not only make important contributions to the Christian understanding of calling and vocation, they write for a lay audience in a way that is life giving for ordinary believers seeking to be faithful in their work.

Even with that caveat, however, I recommend Calling in Today’s World. Living in a pluralistic world requires us to get inside the perspective of non-Christian faiths, and the book helps us do precisely that. Think of it as a book length exercise in Christian discernment.