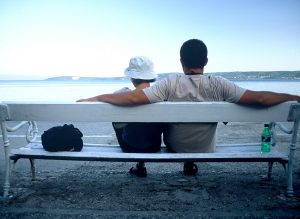 So, with that in mind, consider this fictional—but realistic scenario—and in your comments let’s think it through together.

The situation
Jan grew up in a Christian family, but fell away from faith during high school and moved out as soon as she could. She had fallen in love with a classmate, David, and they moved in together soon after graduation. From the beginning they were clear that this was not temporary, but a permanent relationship. They were committed for life. A combination of disillusionment about the church, some political libertarianism, and no doubt a bit of rebellion kept them from having either a civil or a church wedding ceremony.

Jan’s family did not withdraw from them but included David in family gatherings, and though some tension was always present tried to make both Jan and David feel welcome. Not surprisingly, they said some things they later regretted, and wish they could do some things over, but on the whole they tried to keep communication open.

Then, after two years of living together, Jan and David began coming to faith (whether coming to faith or back to faith is beside the point—whom besides God can tell, anyway?). They started attending church with Jan’s parents, and hanging with them more. They asked questions, and discussions about faith became conversations instead of debates. One day they suggested they’d like to get married, and planned a date about a year in the future. Jan’s parents suggested that there seemed no reason to wait that long, so they moved the date up by six months. Jan and David went to the pastor of the church they were attending with Jan’s parents and asked him to counsel them and to perform the ceremony.

A date was set for beginning the counseling, but the pastor said he could marry them only if they stopped living together. (David and Jan were deeply angered by his requirement.) He came to this conclusion after talking with 5 other ministers in his denomination, as well as with the elders of the church. His concerns leading to his conclusion were three:

1. If Jan and David were really repenting of living together outside of marriage, they needed to act on their repentance.

2. A wedding ceremony is a service of worship, which would be compromised if the couple being married were publicly known to be living in a relationship not sanctioned by Scripture.

3. A wedding is public, and simply marrying Jan and David would send a message to both the church and wider community that there was no consequence for cohabitation.

Response #2
The pastor should marry them without the precondition of their living separately, considering these five points:

1. All couples married in the church are sinners—equally sinners. The only question is whether we can see their sin and whether it’s the type of sin about which we set preconditions for.

2. There is a real danger that this precondition will turn Jan and David away from faith in these tender moments when their faith is weak and young and easily stumbled. That would be a greater tragedy—and the irony would be that the church would refuse to marry them while being the institution that insists they are wrong not to be married.

3. Even if this is repentance on the part of Jan and David, it is wrong to assume that when the Spirit works in someone the same results will always flow in the same order. Let’s face it: people grow at different paces and in weird ways. This precondition, no matter how well intentioned, is an imposition of law when grace is needed.

4. There are other ways to signal disapproval of cohabitation, if such is deemed necessary—one way is to bar them from the Lord’s Table until their wedding, and then welcome them to the Sacrament during the service.

5. As our world changes we need to be clear about what biblical marriage consists of, which is two things, namely a personal commitment to a life-long covenant relationship and a public declaration of that commitment. Since the Scripture neither mandates a civil license nor a church service, by this measure Jan and David are already married. The church should recognize this and develop ways to welcome couples like them—since doubtless there will be many more like them in the decades ahead as God calls members of the postmodern generation to himself.

So, how should Christians think about this? How should the church respond to couples like David and Jan? What biblical texts are relevant? What, in other words, does faithfulness look like? And is this a matter for the church not for individuals?