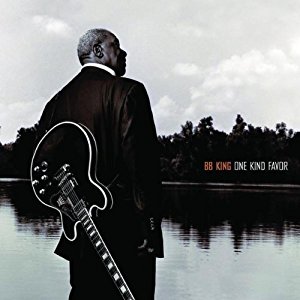 When I grow up, I hope I’m like BB King. Not in being a blues musician (which would be a hopeless dream), but in being someone who has honed his gift into excellence. Which King has done, and which is proved on his latest release, One Kind Favor, produced by T Bone Burnett.

You can hear it on this CD: a lifetime spent doing something from the heart, which in BB King’s case means 83 years living the blues, writing songs, singing and playing his beloved Gibson guitar, Lucille. His voice is older, an authentic witness to a broken world where love disappoints but hope will not die.

I get so weary in the evening when the suns goin’ down
I get so lonesome when my baby’s not around.
When I go to bed at night,
And the birds begin to call.
I feel so sad and lonely,
For my baby that ain’t all.
Well I get up in the mornin’,
Just before the break of day.
Thinking about my baby,
But I know she’s going to stay.

“King’s guitar playing was never about ‘shock and awe,’” Jeff Hahne says, correctly, in an online review. “The man can make one note have more emotion than any lyric or complete solo. His riffs and guitar work aim straight for the heart like good blues should. His voice is weathered and aged, but it only gives more credence to the lyrics that he sings.” Few people can sing and play the blues as well as BB King. But we can listen, and find we are somehow more fully alive when we do.