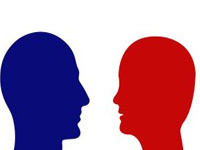 Often the questions we face in a pluralistic culture require Christians to develop an apologetic for their faith. A reasonable, winsome defense of what we believe to be true. And sometimes the questions that are raised go to very heart of things.

Imagine, for example, that you are talking with a non-Christian neighbor, or perhaps a colleague at a table in the cafeteria at work. This is not the first time you’ve talked about the things that matter most, but this time your friend raises questions about Christ’s crucifixion. They don’t doubt that it occurred in history, but they do wonder about its meaning. How is it possible, they ask, that the death of a single person so many centuries ago in an obscure province of the Roman empire can have any cosmic significance for us, today? His martyrdom clearly galvanized Jesus’ followers, of course, and continues to do so, but isn’t that all it really amounts to?

So, in response you explain how God punished Christ not because he deserved it, but to pay the penalty for those things which we have done that are evil, which the Bible calls sins. Evil separates us from God, who knows no evil, and since God is life, this means that the penalty for evil is death. Christ accepted the death we deserve as God’s punishment for our sins, and now that the penalty has been paid on our behalf, we can be forgiven. God is like a judge, you say, who loves the prisoner who appears before him in court, and so takes upon himself the punishment the law demands on behalf of the guilt person. He pays the penalty, so the person can go free.

Wait a minute, your friend objects. Any judge who does that should be bounced from the bench. They may feel loving, but they’re also crazy. Any judge who went to jail and allowed a murderer to go free wouldn’t be just, but wrong.

“A judge would not be respected,” they point out, “if having convicted a criminal and sentenced him to death or imprisonment for life he underwent execution or served the sentence himself. He would be thought to be perverting the course of justice. A father or mother who declared that the children could not be forgiven until he or she had appeased and satisfied his or her wrath by committing suicide might be reported to a society for the prevention of cruelty to children and admitted to a psychiatric hospital. Self-punishment of this sort by a mentally healthy person is inconceivable. Of course God’s sense of justice must be both stronger and more justified than a human judge’s or parent’s. But precisely because God’s justice is the justice of holy love, it seems all the more difficult to think that he could do something which would be condemned if done by a good judge or a good parent. Certainly this type of teaching is unlike the style of Jesus, who repeatedly taught the people about the Father by speaking in parables based on everyday experience and by emphasizing that the Father is good, is like a good human parent—only more so.”

And having said that, they wait for your response.

2. Does the argument (noted above) against the “loving judge” explanation of the cross exposed a fatal flaw in this well-known analogy? Why or why not?

3. In a pluralistic culture which celebrates tolerance, how should the Christian explain and talk about the following aspects of Christian belief? The wrath of God. The just punishment of sinners. The meaning of the atonement. The cross and it’s significance. The possibility of hell.

The challenge concerning God as the loving judge is taken from Evangelical Essentials: A Liberal / Evangelical Debate by David L. Edwards, with a response from John Stott (Downers Grove, IL: InterVarsity Press; 1988) p. 153