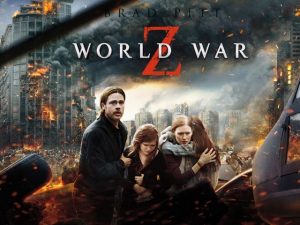 A reasonable fear
The final words uttered by Brad Pitt, the hero of World War Z, is actually the moment that the film comes closest to capturing the reality of Max Brooks’ novel on which it is based. “Be prepared for anything,” he says as a narrator, “Our war has just begun.” Since at that point the zombies have essentially been defeated if you wonder what he meant I’d recommend you read the novel. In fact, I’d recommend the novel, period.

But about the movie: it’s fun summer-movie fare, with amazing special effects, decent acting, and more than enough zombies to make it scary without becoming a cheap horror flick. It’s quite different from the novel, taking the premise of a skillfully crafted work of science fiction and reducing it to a plot with a single hero. (The Brad Pitt character does not exist in the novel.) That’s not the way life works, or the novel works, but as I say, it’s a fun movie. Enough said about that.

As with the old myth of vampires, I do not discount the zombie myth as being utterly disconnected to reality. People in all cultures have always told stories to address their deepest fears and dreams and questions. And people who are not blind to reality know somehow that evil prowls the dark corners of space and time seeking to bring death and devastation into the lives of unsuspecting human beings across the face of God’s good world. In a piece in the New York Times, journalist Taffy Brodesser-Akner made a fascinating comment about the author of World War Z, Max Brooks. “What’s not clear,” she says, “is just how much of this zombie stuff he believes himself. One thing is for sure, though: Max Brooks is very afraid of something.”

I was reminded of the novel when a friend of mine, Ralph van der Aa, emailed to mention he was the translator for the Dutch version of Max Brooks’ novel and thought its themes would interest me. It’s good summer reading, and a serious, well-crafted work of science fiction. Brooks, who is the son of actress Anne Bancroft and film director Mel Brooks, has been giving lectures in place of the normal author-reading tour. Brodesser-Akner notes “he is introduced to his audiences as ‘the world’s leading zombie expert.’ The audience laughs, he shakes his head, but in the end, he hopes that he has somehow passed along his message: Heads up! Look alive! Don’t turn your back! It’s coming.”

Brooks has written for Saturday Night Live, so cynicism might be in order. Is he simply playing with his success in writing about zombies, laughing all the way to the bank? Or is he, as Brodesser-Akner suggests, merely reflecting the inner phobias of a troubled childhood? I do not know, but the seriousness in his prose suggests to me that regardless of his personal motivations, his story captures a deeper truth that our world tends to disbelieve.

The truth is that there are threats facing us as human beings, there is evil abroad in the world, though most of us ignore them, seeking personal peace and affluence instead. What’s more, all the solutions proposed by pundits and experts—mostly technological, medical, or political—clearly fall wide of the mark. The solution is not to discount the warning or to hope in our own resourcefulness but to acknowledge the evil and our inability to solve the threat by ourselves. We need a different story, one with greater power and a better ending. The one I recommend involves a long promised one who died and came back, not as undead but as risen. It’s a crucial difference.

1. When you are with non-Christian neighbors, friends, and colleagues who have seen World War Z or read the novel, ask them what they think the zombies are a metaphor for in the story. Ask your Christian friends the same question. To what extent are the answers different? Why do you think this is? 2. If someone asked you about your personal experience with true evil, how would you respond? Why? 3. How does the quest for personal peace and affluence in a consumerist society full of technology tend to make the notion of threats to human life and well being seem, somehow, less threatening? How might this tend to blind Christians to the things their neighbors find threatening? How might this blind people—Christian and non-Christian—to the nature of evil? 4. An essential element in World War Z is the fact that the zombies are a global threat, so that no one is safe unless everyone everywhere is safe. Why is a global perspective so difficult to maintain, even for those who believe all human beings are one people, made in God’s image, with equal dignity and worth? Though Christians are citizens of various nations, our primary allegiance must be to God’s kingdom with Christ as Lord. To what extent should this more essential citizenship make a global perspective more natural and more essential for the Christian? 5. Max Brooks’ message in his lectures is, apparently a warning. “Heads up! Look alive! Don’t turn your back! It’s coming.” In essence that is also one part of the Christian gospel. Yet, I suspect that many thoughtful adults would find Brooks’ message worth hearing while rejecting the Christian warning. Why does the truth appear less compelling, less attractive, less persuasive than a fictional account of zombies eating the faces off overwhelmed populations? In what ways, if any, should this be a concern for Christians? What, if anything, should we do about it? 6. What aspects of humanness are reflected in the plot of World War Z? Besides the evil that the zombies represent, what other literary themes are woven into the trajectory of the story? How significant in the plot, for example, is the fact that in the film the Brad Pitt character assumes a messianic role?