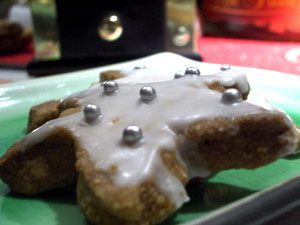 When I grew up and moved away I rarely saw them. But in December of every year I especially remember my grandparents. Each December I carefully add a small collection of bubble lights to the tree, carefully placing them just so because, I admit, too many would be slightly cheesy. Their gentle movement and glow add a dimension to our Christmas tree that I must have – the memory of my grandparents’ tree in full regalia.

Grandpa and Grandma Frolander made Christmas special for our family of eight. And, just as importantly, they never forgot my birthday which was December 15th, a birth date easily rolled into Christmas. Some years on Christmas Eve they drove drifted country roads far out to our small farmhouse bringing two (Two!) presents for everyone. Grandma also brought tins filled with cookies. Tender thumbprint cookies with a dollop of apricot jam in the center, fragile Swedish rosettes dusted with powdered sugar, pressed butter-cookies in the shape of bells decorated with tiny silver balls. Every thing she did was precise and beautiful.

Sometimes I went home with them and in the morning when I awoke in a chilly bedroom alone, I would creep down the stairs and climb into my grandparents’ bed. Grandma would already be up making breakfast – the coffee pot wheezing in the kitchen, the air filled with the scent of bacon. Grandpa would be in bed still listening to NBC News on the radio. I would snuggle under the blankets and he would reach over, just as I knew he would, to pinch me. I would scream. He would tickle me. I would hit and kick him. He would grab my fingers and not let go until more screaming and laughing. It was a good way to begin Christmas vacation.

Say It. Say I love you
We wrote some over the years and twice they visited us in New Mexico where Denis and I lived for twelve years. The last time Grandma remembered my birthday was December, 1980. A few days after she mailed the card, they both died. Grandpa had finished lunch that day and moved to his living room chair where he was finishing the wooden clocks he had made for his grandchildren. They were gathered around his feet ready for clockworks and hands. After Grandma washed the lunch dishes she went into the living room to knit and found him sitting unnaturally still, his head fallen forward. She called my mom who lived thirty-six miles away to say, Dad has died. Mom told Grandma she would be there as fast as ever she could. When she arrived in Warroad she saw the ambulance at their door and a crew carrying a body out of the house on a stretcher. She assumed it was her dad and did not, could not, comprehend the words, no, this is your mother, she has gone, too.

As the family gathered from far away places – Mom and her brothers met at the house to plan, to be together. I listened to their talk and tried to comprehend. The house was decorated. Sitting at the kitchen table drinking Grandma’s coffee and seeing plates of Grandma’s Christmas cookies, divinity and fudge on the counter, I remembered the loveliness of her hands as she baked and carefully decorated dozens of goodies. Now this surreal moment as we sat nibbling her sweets. How could she not be here?

I regretted that I hadn’t thanked them enough for their gifts, for their love. That I didn’t take more time to write and call. I believe I will see Grandma again, and can tell her how much I love her. We aren’t as certain of Grandpa, but there is evidence that in his final days he may have called to God.

Someone pointed out that I may overemphasize that the way Home to God is through love. Out of recognizing his love for you and simply reaching out for him. It seems to be a theme that appears and reappears in the way I talk, the way I write. That observation pushed me. I actually believe there are other ways don’t find saving grace. To the extent that I imply otherwise – it is not right.

Author, Ellis Potter reminds us: “We are each different. I can tell you how and why I came to be a Christian, but you cannot do it that way. You have to do it your own way. You are not me. You are unique. You have to come to God and God has to come to you in a way that you understand intellectually, emotionally, existentially, and morally, in ways that I might not understand. According to the Bible, your relationship to God is like a marriage. Christians often speak of sharing their faith, but I don’t believe I can share my faith. I think I can share the faith – what is believed by Christians – but I cannot share my faith any more than I can share my marriage. I have a marriage, and I can tell you about it, but I cannot share it with you. I have a faith in Jesus Christ, and I can tell you about it, but I cannot share it with you. You have to have your own. You cannot have it by copying another person, or by inheriting it from your parents or your grandparents. We can say that God has no grandchildren. He only has children. Each one has to come directly to him.” P. 106 Three Theories of Everything by Ellis Potter.

Amazing Ways
I believe he is right. Easily, easily, off the top of my head I can tell you about three people who came in very different ways. My mother – out of fear of going to hell and of not telling her children about the faith. What would she say to God when he asked her about her six children? A friend – an undergraduate when this happened: his bike had a flat tire on the way to class one day. He was beside the street moodily fixing it when a member of Campus Crusade for Christ walked past and trapped him into listening to a memorized presentation of the “Four Spiritual Laws.” This person was extremely annoying, but he couldn’t get the “Laws” out of his head and later that night, he turned to Christ. And one more; Quentin, a young man we knew back in the day, came to our New Mexico commune, because he had been on an acid trip and saw Jesus who had spoken to him from the cross. He was deeply moved. (I don’t mean this to be funny, but I can’t remember what Jesus said to him.) Quinton knew nothing about Christianity, but had heard we were Christians and he wanted to become one. I’m not recommending this particular way, just saying…

I’m grateful for the differences and surprising ways people reach out to God to find, there he is, ready to meet us. Even with our doubts and unanswered questions. He operates unfathomably outside my box. But I think this may be the core Gift of Christmas; that Christ was born to bring us an amazing salvation, and he has the power to bring us Home in a myriad of ways from a thousand places in the wilderness. So I don’t care how my grandfather came to God. If he did. I just want him.

In my memoir, The Exact Place I included a recipe from Grandma Frolander – Lemon Angel Pie. She often made it for holiday meals. It was always a part of Christmas and it became one of my mother’s traditions, too. We looked forward to this light-as-air dessert. There was always room for it even though we were stuffed with mashed potatoes, turkey, gravy, dressing and cranberries. The lemon filling, intense, lightly sandwiched between two layers of whipped cream, resting on a crunchy meringue – is still a favorite dessert. A bite of heaven. Perhaps it will be featured at God’s Table? I don’t know. But for now we enjoy this pleasing bite; a taste, perhaps, of a more perfect life – one where we remember to say “I love you.” On time. Where death no longer stalks us, because it’s been conquered by our Friend and Savior, Jesus. For all time. So, forever may Christmas always be merry to you.

Beat egg whites and until foamy. Gradually add cream of tartar and sugar, beating until meringue stands in stiff peaks. Spread in a buttered 9 inch pie plate. Or shape into 9 small meringues on a sheet of parchment on a baking sheet. Bake at 275 for one hour or until crust is dry all the way through. Turn oven off. Allow crust to cool in the oven for several hours.