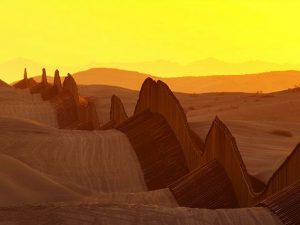 Bulwarks of safety
Walls have been in the news. At various places along America’s southern border the U.S. government is erecting a border fence to try to stem the tide of drugs and undocumented workers from Mexico. Israel is building a wall around the West Bank, a 26-foot tall, 470-mile structure of concrete, steel and barbed wire when completed. For decades the Berlin wall symbolized the very worst of what humanity was capable of. On the ceiling of our living room in Toad Hall is a short length of rusty barbed wire, a remnant from the wall that during the Cold War divided Austria from Czechoslovakia along the bank of Danube outside the city of Bratislava.

Walls are an ancient invention. Many great cities were fortified with massive walls—Babylon, Constantinople, Jerusalem, Vienna, Warsaw—and history is replete with stories of sieges and battles ending when the walls of a city were breached. It is a poignant image that J. R. R. Tolkien used to good effect in his epic tales of The Fellowship of the Ring. Today in free societies those with money build gated communities, withdrawing into a circle of safety leaving less moneyed neighbors to deal with the less respectable problems of society.

Walls protect, keep marauders and the riffraff at bay, and shelter those who have the good fortune to be inside. For good reason did the Hebrew poet celebrate the walls of Jerusalem (Psalm 48). The metaphor is so strong in the biblical imagination that such walls can be used to picture salvation itself (Isaiah 26:1; 60:18).

There are two problems with walls: they can be breached and they isolate. The possibility of breaching provides the reason why walls must be built well and adequately defended. The fact that walls isolate is a reason why in some cases they should not be erected at all.

The trouble is that walls are usually thrown up when people feel threatened and insecure, which is not necessarily a good time for careful reflection. The menace is on the horizon, a warning has been sounded, and so the wall is erected. Only later do we recognize that our sense of heightened security has arrived with increased isolation—being inside the wall means we’ve left some outside.

Walls can be made of wood or stone, steel or electrified wire, earth or bricks. They can also be constructed from attitudes that exclude, language known only to insiders, activities that leave out outsiders, or spaces that feel unsafe for those who are different. These more ethereal walls may not seem as forbidding as the ones constructed of massive blocks of granite but they can be as effective. The ones erecting them may not even be fully aware of what they are doing, but the move to isolate themselves within a guarded circle of likeminded compatriots is still sustained. The sense of threat is lessened—to us, to the truth, and to our children—and what can be wrong with that?

What can be wrong is that it is antithetical to Christian faith. Even in the cause of safety we are called not to isolation but to follow our Lord into the world in his incarnation, to a place not of security but of the cross. And so our prayer should be:
Shelter us not with walls that exclude: but with your widespread wing. It is actually the only truly safe place for the redeemed in a fallen world.