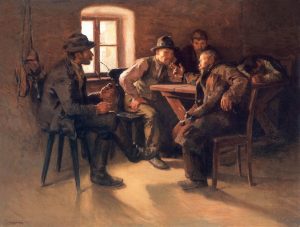 Sometimes I swear it feels like everyone has become the worst sort of fundamentalist: quick to argue, slow to listen, no, unable to listen, eager to belittle, loud, insistent they are right, convinced that their enemies are advancing the apocalypse and mystified you can’t see it because it’s so obvious it’s about to hit you in the head. What, exactly, is wrong with you, anyway? It’s not rocket science, you know. So someone says something and we say something, and it’s off, an argument, a debate, pro and con, although everyone knows no one is going to change anyone’s mind about anything anytime soon even if they are argued to a standstill.

It is always sad to me that so few people intentionally seek the best arguments for views they oppose. No wonder we talk past each other. It is especially distressing when Christians are guilty of this. We should be the most fearless searchers for truth imaginable, always willing to face the strongest arguments against what we believe, the most relentless in refusing to construct straw arguments in order to win a debate. We do not need to be fearful or hesitant because we serve the one who is the Truth, capital T. We can even say, “I don’t know,” and smile through the jeering because we know that knowing-on-the-spot, though intensely satisfying, isn’t the final measure of being on the side of truth. So we can wait and learn, and figure it out and be glad that salvation isn’t based on winning arguments or knowing all the answers.

And sometimes we remain silent, trying to listen and understand, and then afterwards see our silence not as prudence but cowardice. Aren’t some statements, some ideas simply so wrong, so wicked that they need some response, even if it’s a poor one? It’s fine to debate immigration policy but it’s never fine to belittle refugees and undocumented workers as racially inferior. So afterwards—it’s always afterwards—the stain of our silence quietly haunts. We think of things we could have said, killer arguments, clever comebacks… oh, to be able to do it over.

So, when should we speak and respond, debate and argue, and when should we refrain and be silent? It might help if we try to discern some answers to that before the need to decide arises.

1. Discerning Christians will want to root their thinking in the truth of God’s word, and it’s not surprising that the wisdom literature of the scriptures speak with some eloquence to these questions. What follows are proverbs, remember, not commands or promises, written for gaining wisdom, which means we need to analyze, interpret and apply them appropriately. Here are a few to begin your biblical study:

Whoever belittles his neighbor lacks sense,
but a man of understanding remains silent. (11:12)
Leave the presence of a fool,
for there you do not meet words of knowledge. (14:7)
A rebuke goes deeper into a man of understanding
than a hundred blows into a fool. (17:10)
The discerning sets his face toward wisdom,
but the eyes of a fool are on the ends of the earth. (17:24)
Even a fool who keeps silent is considered wise;
when he closes his lips, he is deemed intelligent. (17:28)
A fool takes no pleasure in understanding,
but only in expressing his opinion. (18:2)
It is an honor for a man to keep aloof from strife,
but every fool will be quarreling. (20:3)
Do not speak in the hearing of a fool,
for he will despise the good sense of your words. (23:9)
Answer not a fool according to his folly,
lest you be like him yourself.
Answer a fool according to his folly,
lest he be wise in his own eyes. (26:4-5)
Do you see a man who is wise in his own eyes?
There is more hope for a fool than for him. (26:12)
If a wise man has an argument with a fool,
the fool only rages and laughs, and there is no quiet. (29:9)
A fool gives full vent to his spirit,
but a wise man quietly holds it back. (29:11)

Which of these proverbs are convicting to you? Which are puzzling, and why might that be part of real wisdom? Which are the most difficult for you to adopt as a habit of the heart? Why? Taken together, what do they suggest will be true of the truly wise person in argumentative situations?

3. Who we are talking with can be significant in determining our level of responsibility in the conversation. It can be helpful to think about the people in our life as falling into a series of concentric circles with each widening circle bringing less responsibility to correct every instance of falsehood and misguided ethics. Who would be in each of your circles? Why?

4. What topics, opinions or positions are so important that any expression of them always requires a response? Why?

5. What topics or ideas always evoke a strong response in you? Why is that so?

6. Is it ever better to lose an argument than to win it? Is there a difference between an argument, a debate and a heated discussion? Does it matter?

7. Heather Gerken, dean of the Yale Law School, wrote a wonderful op-ed piece in Time magazine (July 13, 2017), “Campus Free Speech is Not Up for Debate.” She argues there is a reason why law schools have not seen the protests against unpopular speakers that have erupted on so many college campuses:

There may be a reason why law students haven't resorted to the extreme tactics we've seen on college campuses: their training. Law school conditions you to know the difference between righteousness and self-righteousness. That's why lawyers know how to go to war without turning the other side into an enemy. People love to tell lawyer jokes, but maybe it's time for the rest of the country to take a lesson from the profession they love to hate.

In law schools we don't just teach our students to know the weaknesses in their own arguments. We demand that they imaginatively and sympathetically reconstruct the best argument on the other side. From the first day in class, students must defend an argument they don't believe or pretend to be a judge whose values they dislike. Every professor I know assigns cases that vindicate the side she favors--then brutally dismantles their reasoning. Lawyers learn to see the world as their opponents do, and nothing is more humbling than that…

Make no mistake, we are in the midst of a war over values. We should fight, and fight hard, for what we believe. But even as we do battle, it's crucial to recognize the best in the other side and the worst in your own.

[Source: http://time.com/4856225/law-school-free-speech/]
What might we learn from law school training? Why should this be characteristic of believers in a pluralistic culture hostile to Christian faith? Why is often not characteristic of Christians in the public square? What plans should you make?

8. When is it always best to remain silent, listen and if we speak to limit it to asking questions?

9. To what extent is the question of being silent or entering an argument or debate an issue for Christians within the church?

10. What topics or issues keep coming up in the places you frequent, whether your church, neighborhood, workplace, coffee shop, fitness center, family gatherings, or wherever? How many of them have you carefully researched and thought through? Have you found creative ways to help those who disagree with you to reconsider their positions?

11. What interpersonal techniques do you use to try to reduce hostility and lower tension when friendly arguments get so lively as to become less friendly?

“Discernment 102: How To Disagree Agreeably” available on Ransom’s website.