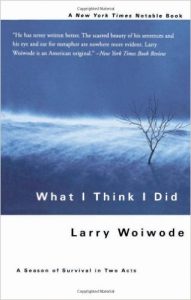 The world is full of books—as Solomon noted well before the advent of printing presses and amazon.com—and some of those books are books of fiction. While much fiction is worth reading, relatively few novels and short stories are worth reading more than once. Even fewer are so exemplary to be worth reading again and again, each time cherished for the grace of story-telling that’s found between their covers. I usually wait for most books to appear in paperback, but a few authors have become so precious to me that I gladly purchase their work in hardback. Not only do I prefer to read them in hardback, I am delighted to have a greater monetary return accrue to them from my purchase. My list of such authors is relatively short, but one who is near the top is Larry Woiwode. Whenever a new title appears from him, I buy it. Hardback.

I remember the first time I read something by him. The November 22, 1982, issue of The New Yorker had just arrived in the mail. As usual I paged through it to read the cartoons, and then turned to the fiction. The short story was called “Firstborn,” by Larry Woiwode. It was searing, and disturbing, and arresting and lovely. So I bought his first novel, What I’m Going to Do, I Think, and hadn’t finished before concluding that the short story was no fluke. So I went on to his second novel, a masterful and massive story of four generations and the grace of God, Beyond the Bedroom Wall. Here was an author who wrote as if words and reality, creation and redemption truly mattered. (“Firstborn,” I’m happy to say, is one of thirteen stories collected in Woiwode’s The Neumiller Stories. A second collection of nine short stories, is Silent Passengers —and I recommend both collections highly.)

It turns out that Larry Woiwode (pronounced WHY-wood-ee) is an evangelical, an elder in an Orthodox Presbyterian Church in North Dakota, but I didn’t know that when I began reading his work. “I write for The New Yorker because I hope to pull it in an increasingly Calvinist direction,” Woiwode told World magazine. “I measure every sentence against my faith and the way God has revealed himself.” Evangelical readers may be aware of Woiwode through his articles in Books & Culture or Image, publications to which he contributes essays on a wide variety of topics. Though I can not praise his fiction too highly, I am not at all persuaded by his assessment of fantasy literature. In Acts, an otherwise helpful commentary (of sorts) he wrote for non-Christian students who had never read the Bible, he argues the fiction of Lewis and Tolkien is escapist and shallow. And though it’s true that their fantasy literature is remarkably different from Woiwode’s gritty realism, surely there is room for both types of fiction within the Christian world and life view.

Woiwode’s fiction is serious, literary, robust, and brutally truthful—and may thus surprise the Christian whose experience of fiction has come from the saccharin best-sellers dispensed in religious bookstores. “I know that every Christian writer must be aware, sentence by sentence,” Woiwode says, “of whether what he or she is depicting is there to purposely cause a brother or sister to stumble. If not, then it could be that the self-appointed gatekeepers of what is proper are the ones causing brothers and sisters to stumble by fencing them from actuality.”

Woiwode’s most recent book is the first in a projected trilogy, a memoir entitled What I Think I Did: A Season of Survival in Two Acts. Alternating between past and present, it is, at one and the same time, the story of a young man finding his calling as a writer in New York, and the narrative of a mature writer struggling to get his family through a bitterly cold blizzard in North Dakota when their furnace proves insufficient for the task. It is also the story of a pilgrimage of faith, the sort much needed if pre-evangelism is to occur in our post-Christian culture. It’s full of fascinating vignettes and anecdotes, people and events, all of which came alive to me as I read, even though his story is so utterly different from my own.

Geography is important in Woiwode’s books. What I Think I Did unfolds in New York and North Dakota, and the lay of the land acts almost like a character in the narrative. In that regard I was reminded of Kathleen Norris’ Dakota: A Spiritual Geography, another memoir I recommend. “The high plains, the beginning of the desert West,” Norris writes, “often acts as a crucible for those who inhabit them. Like Jacob’s angel, the region requires that you wrestle with it before it bestows a blessing.” In an age when mobility is so constant that few ever get a sense of belonging to a place, Woiwode’s abiding sense of home and keen observation wherever he is adds refreshing depth to his prose. The following excerpt from his memoir will give you an idea of his style.

I stand in a bookstore in South Dakota, at the end of a scheduled book-signing, next to the only person left other than a cashier, the manager. After two hours of a trickle I want to extricate myself from the manager-fellow’s talkative embarrassment, or at least say I’ve had from hundreds to a half-dozen at book-signings, and this was not as bad as the low end, so not to worry, people hardly read anymore, and—
At that moment a nun walks up. She wears a matching skirt and jacket any woman might, trimmed with darker piping, but a piece of identical material pinned to her gray hair is the giveaway. For me nuns are messengers. I stand alert.
“Sister!” I say, as I was taught in parochial school, seeing that what she grips to her chest are my heavy books. They were bought years ago, from the looks of their dust jackets, and at the sight of them the manager walks off.
“So you’re Larry Woiwode, the author.”
“Well.” Those are my books, I want to say, uneasy with “author,” after years of being a writer, day by day. Now and then I even say that to someone, but wouldn’t think of correcting her. Her pink and dandily lined face has the pugnacious aspect of a survivor.
“I recognize you from your pictures. Otherwise I wouldn’t know you from Adam.”
I sense a jolt of grace or whatever spiritual emptying it is that passes between us (as a husband and wife feel at a surprise sight of each other) and wait for her message.
“I’m Sister Bernadette… I used to baby-sit for your parents.”
“Oh?”
“I baby-sat you.”
“Goodness!”
My wife, who has been examining books with the downcast countenance of overload from a bookstore —too many books as mere products —suddenly turns and walks over.
“‘It would have been when you were two or three because our family moved to South Dakota after that.”
“Yes. We moved into the house where you had lived.”
“Don’t get me going on that. You wrote a story about the house in this book” —she joggles the books in her arms— “and got it all wrong. What I’ve thought about all these years is how I wheeled you around in a stroller. I took care of you and your brother —Danny, isn’t it?— when your parents wanted to go off on their own.”
“Dan, yes. How was I to take care of?” This wonderment develops when your memory is failing.
“Oh, you know—”
She glances at my wife, so I introduce them. “My wife,” I add, so she knows our relationship isn’t salacious.
They shake hands.
“Your mother said to me about you, ‘He might throw a tantrum and hold his breath until he turns blue, and if he does that, you just walk away from him. Don’t give in. Leave him in his stroller or wherever he is and walk off till it’s over. That’s what I do. Don’t worry, he’ll eventually take a breath, and then stand back, because, oh, the howl that will come out then!’”
“Is that what I did?”
“Not for me, no.”
She smiles so sweetly I’m not sure she’s telling the truth. Then she holds out her books for me to sign.

The day I purchased What I Think I Did I determined to savor it slowly, reading only a few pages every day in order to extend the pleasure for as long as possible. But I couldn’t. Pulled in by Woiwode’s masterful crafting of words, I devoured it, and as I read the last page found myself looking forward to reading it again.

I recommend What I Think I Did to you. Consider it an introduction to a brother in Christ whose gifted writing and finely crafted fiction will help you see reality more clearly.