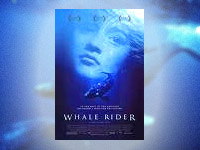 She fell into the sea. The thunder of the whales departing was loud in her ears. She opened her eyes and looked downward. Through the foaming water she could see the huge tail fins waving farewell.”

“Then from the backwash of Time came the voice of the old mother whale. ‘Child, your people await you. Return to the Kingdom of Tane [Maori god of Man] and fulfill your destiny.’ And suddenly the sea was drenched again with a glorious echoing music of the dark shapes sounding.”

Koro is chief of a Maori tribe, a man desperate for a male heir who can lead his people and maintain the sacred traditions in a modern world. Koro’s second son is wayward, gentle but not cut from the stuff of leadership. His first-born Porourangi is a sculptor, more interested in his art than in following in the footsteps of his stern father. As the movie opens, Porourangi’s wife dies bearing twins, and to Koro’s horror the male twin dies while the female lives. “Take her away,” Koro says in disgust, but when his heartbroken son leaves for Europe, Koro and his wife have no choice but to care for their granddaughter. Against Koro’s wishes Porourangi names her Paikea, after the mythical whale rider who was the first great chief among their Maori Ancestors. Koro calls her Pai, and grows to care for her even though his disapproval that she is a girl makes her yearn for his full acceptance.

One of the delights of Whale Rider is the eleven-year old Keisha Castle-Hughes, who plays Pai in her first role as an actress. It is a remarkable performance. This low-budget film is both charming and revealing. Charming for being a simple story, lovingly told. Revealing as a reminder that in our religiously pluralistic world, old pagan traditions like the Maori’s belief in the Ancients are attractive to a generation starved for transcendence.

Koro gathers the boys of the tribe, and begins to train them in the traditional rituals and myths that have been passed down over so many centuries. Pai has a natural affinity for the tribal lore, but he forbids her involvement. Still, she finds ways to learn the chants, and even gets her kindly but wayward Uncle Rawiri to teach her the warrior art of Maori stick-fighting.

Convinced no male heir will be produced by his disappointing sons, Koro takes the boys of the tribe to a distant lagoon. There he takes the whale’s tooth pendant which he wears as the sign of being chief and throws it into the water. The boy who retrieves it will be his successor, but none can find it on the bottom nestled among the seaweed.

So in his despair, Koro chants, calling for the Ancestors, for their wisdom, for their presence. Pai also chants, but her voice they hear.

Whale Rider has won acclaim at a number of film festivals, including awards at the 2003 Sundance Film Festival, and in Toronto and Rotterdam. Based on a novel by the same title, the themes which shape the plot are hardly novel: girl achieves success in a male-dominated world; tradition gives way to the pressures of modernity. Still, in Whale Rider we watch them unfold in unpredictable ways. The window of insight into Maori culture and religion is fascinating, and the strong acting makes us care about this dwindling tribe of people in a tiny, decaying village so far away on the shore of New Zealand.

The Maori chants and traditional beliefs that are depicted in Whale Rider are strangely attractive. This is a world that few of us know, and there is something in the eery echos of the other-worldly songs of whales that draw us further in. Add a main character that we grow to love and cry with, and Whale Rider turns out to be a film that can pull the heart-strings and tap into our desire for significance in life that transcends the ordinariness of the moment.

The postmodern generation yearns for spirituality, a transcendent story, and for worship which displays a deep-rooted, imaginative beauty. Does not the Scriptures promise all three: a true intimacy with God, a Story that fulfills all imagining, and spiritual disciplines that stretch back over millennia? Then why aren’t we displaying them? How will we commend our faith to someone like Pai and Koro when they move in next door? And how will we tell our Story so that it’s immeasurable beauty can be heard over the songs of the whales?

1. What was your initial reaction to Whale Rider? 2. Why did you react that way? 3. In what ways has the ever-growing religious pluralism of our postmodern world been most evident to you? 4. Does religious pluralism make you uneasy? Why or why not? How does religious pluralism affect your faithfulness as a Christian? 5. What is the message(s)—both major and minor—of the film? Consider how the film addresses themes such as: the nature of reality or what is really real; what’s wrong with the world, and what’s the solution; the impact of our postmodern world on traditional ideas, values and community; and the significance of story to bring meaning to existence. 6. What is attractive here? How is it made attractive? 7. Where do you agree? Disagree? Why? In the areas in which we might disagree, how can we talk about and demonstrate the truth in a winsome and creative way in our pluralistic culture? 8. In what ways were the techniques of film-making (casting, acting, direction, script, music, sets, action, cinematography, editing, lighting etc.) used to get the film’s message(s) across, or to make the message plausible or compelling? In what ways were they ineffective or misused? 9. Most stories actually are improvisations on a few basic motifs or story-lines common to literature. What other films come to mind as you reflect on this movie? What novels or short stories? What sections of Scripture? 10. With whom did you identify in the film? Why? With whom were we meant to identify? Discuss each main character in the film and their significance to the story. 11. What insight does the film give into the way postmodern people see life, meaning, and reality? 12. How can you use the film as a useful window of insight for Christians to better understand our non-Christian friends and neighbors? 13. Might the film be a useful point of contact for discussion with non-Christians? What plans should you make? 14. To what extent does your faith in Christ flow into a living relationship with Jesus, a healthy spirituality, and a vibrant worship? How will you commend your faith to a neo-pagan? To what extent is your witness to the Story of Jesus marked with creativity, beauty, and surprise?