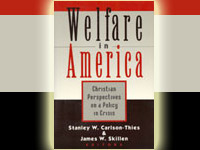 Between 1992 and 1995, the Center for Public Justice, a Christian civic-education and public-policy think tank undertook an extended project named the Welfare Responsibility Inquiry. In May 1994, the project hosted a conference in Washington, DC, on “Public Justice and Welfare Reform.” The project involved, at its center, a group of scholars who met periodically to discuss the issues involved. Those scholars then wrote the papers which are collected in Welfare in America.

“Welfare in America,” James Skillen writes, “argues that assistance to the needy does not, and should not, come primarily from government. Government, whether at federal or state levels, should help hold people accountable to their various institutional and personal responsibilities rather than fill in for every failure.” The range of topics addressed in Welfare in America is extensive—as will be noted in the titles listed below. Though no reader will agree with everything here, those whose calling requires them to think through this issue with care will be wise to include Welfare in America in their list of books to be read. To help you see what’s included, here is a list of the papers and their authors:

Introduction
“The American Welfare Policy Crisis: A Challenge to Christian Reflection” by Stanley Carlson-Thies (Fellow, Center for Public Justice)
Background and Context
“Why End ‘Welfare as We Know It?’” by Jean Bethke Elshtain (Laura Spellman Rockefeller Professor of Ethics, School of Divinity, University of Chicago)
“Beneath and Beyond the State: Social, Global, and Religious Changes That Shape Welfare Reform” by Max Stackhouse (Stephen Colwell Professor of Christian Ethics, Princeton Theological Seminary)
“Who Cares? Poverty and the Dynamics of Responsibility: An Outsider’s Contribution to the American Debate on Poverty and Welfare” by Bob Goudzwaard (Professor of Economics, Free University of Amsterdam)
“What’s Wrong with Welfare Rights?” by Mary Ann Glendon (Learned Hand Professor of Law, Harvard Law School)
“Defining Poverty through the Welfare Debate: Limitations for Policy and Program Response” by Stephanie Collins (Researcher, Citizens for Public Justice, Toronto)
Foundations for a Christian Approach

“The Question of Being Human in Assessing the Requirements of Welfare Policy Reform” by James Skillen (Executive Director, Center for Public Justice)
“Biblical Teaching and the Objectives of Welfare Policy in the United States” by John Mason (Chairman, Department of Economics, Gordon College)
“Foundations of the Welfare Responsibility of the Government” by Stephen Mott (Professor of Christian Social Ethics, Gordon-Conwell Theological Seminary)
“The Poverty Debate and Human Nature” by Lawrence Mead (Professor of Politics, New York University)
“Opposite Sexes or Neighboring Sexes? The Importance of Gender in the Welfare Responsibility Debate” by Mary Stewart Van Leeuwen (Professor of Psychology, Eastern College)
Social Complexity and Diverse Responsibilities

Further Reading
The Tragedy of American Compassion by Marvin Olasky (Wheaton, IL: Crossway Books; 1992) 233 pp. + notes and index. In this very readable and highly influential book, the editor of World magazine argues that American efforts to fight poverty in the 19th century not only were more balanced—and more effective—than the present welfare state, but that the principles involved show a way out of the tragedy modern welfare has become.

Poverty and Compassion: The Moral Imagination of the Late Victorians by Gertrude Himmelfarb (New York, NY: Alfred A. Knopf; 1991) 389 pp. + notes and index. The second of two detailed and scholarly studies which began with The Idea of Poverty: England in the Early Industrial Age (1984) by the distinguished Professor Emeritus of History at the Graduate School of the City University of New York.