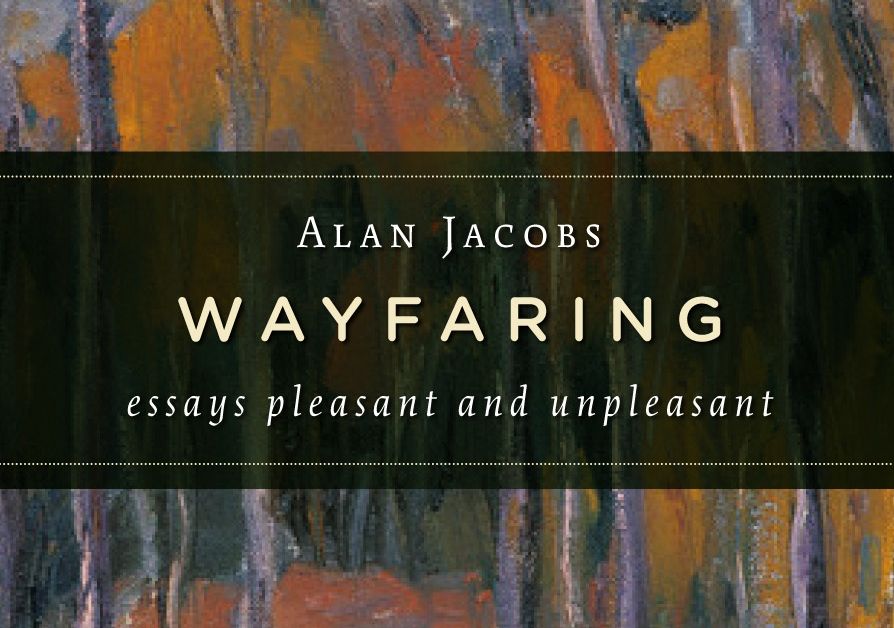 Reflections Worth Reflection
When the name Alan Jacobs appears in some publication I always anticipate reading the essay he has written with a quiet confidence born of experience. My experience has taught me that I will find whatever he has penned to be well written, thoughtful, and stimulating. I should probably also note that when his name appears a sense of dismay arises within me born of the knowledge that here is a man who can write faster than I can read. Why is it that gifts are so obviously distributed in such an unfair manner in this wretched world? Why…

OK, I am back. Sorry. Let me continue.

Eighteen of Dr. Jacobs’ essays from Books & Culture and First Things, plus two pieces that were previously unpublished have been collected in Wayfaring: Essays Pleasant and Unpleasant. As Carlos Eire, author of Waiting for Snow in Havana notes, “There is nothing unpleasant here, so never mind the title.”

Here is a brief sample of Jacob’s prose, from “Reading the Signs.”

I will always remember the day I discovered the concept of irony—not the word; that would come much later. But when I did learn the word, a smile of recognition spread across my face and an image came to my mind.

I was perhaps six or seven years old. It was a hot summer’s day in Birmingham, Alabama, and I was making my more-or-less daily pilgrimage to Snappy’s Service Station to get a Coke. A new Chevron emporium stood nearby, but its Cokes came only from a modern coin-operated machine. At Snappy’s you had to fish them out of a big red waist-high cooler with a sliding glass door on top, and then you had to pay at the register, but it was worth it because the drinks often were slightly slushy with ice. My friends and I scorned the modern machines.

But as I approached Snappy’s on my banana-seated red bike, my mood of anticipation was suddenly broken, and I braked to a quick stop. There in front of the station a car had crashed into a light post—and, to judge from the condition of the car’s front end, had done so at a significant rate of speed. No one was in the car or nearby, nor, as I watched, did any ambulance or police car turn up, so perhaps the accident had happened some time earlier. The only movement at the scene came from the rectangular plate dangling by a single bolt from the front of the car, swaying a little in the hot breeze. It read GOD IS MY CO-PILOT. (p. 83)

Jacobs’ imagination ranges widely, and never gets bogged down in scholarly jargon or floats off into technical concerns of interest only in obscure corners of academia.

I recommend Wayfaring to you. It allows us to listen in as a keenly discerning Christian mind reflects on W. H. Auden, Harry Potter, trees, Kahlil Gibran, The Green Bible, the clever (or just silly) signs that appear in front of many church buildings, and more, much of which is rooted in reading and literature but not limited to it.

When you get the book, take your time reading it. Alan Jacobs’ essays are worth savoring. And know that probably, in the time you took to read Wayfaring, he has produced twice as many words worth reading.

Like I used to tell my kids: Life is unfair. Get over it.