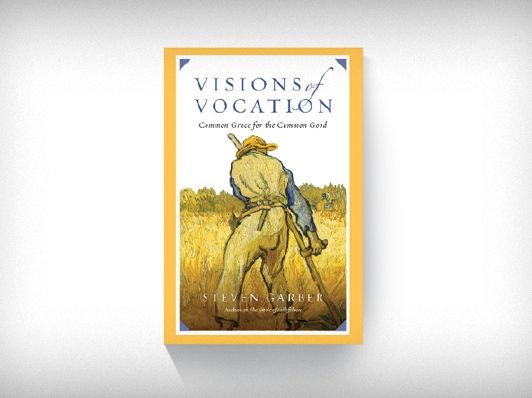 Does work have meaning in a broken world?
Day by day, patiently and in unhurried conversations, group discussions and lectures in all sorts of settings, Steven Garber gives himself to people as they wrestle with the perennial questions of human existence. Who are we? What is the world like? What should I do? And does any of it really matter? In Visions of Vocation he allows us to listen in as he reflects on the answers that are popular and widely believed, and the answers that are most richly satisfying.

Just so there is no misunderstanding: Steven Garber is my friend, and a member of Ransom’s Board of Directors. If that means you need to check out some other reviews besides this one before getting a copy of the book, so be it. But do read the book. It touches us where we live, addressing the issues that express most intimately the deepest yearnings of our souls.

Visions of Vocation is one of those rare books that manage to strike the right balance for readers. It is scholarly yet accessible—Steve is a serious thinker, but also a storyteller whose interests include Magnolia and the Smashing Pumpkins. He quotes philosophers and sociologists while making their thinking available to readers whose eyes glaze over thinking of reading such things, and he develops his ideas not primarily through argument but by telling stories of people whose lives display what it means to want to take ideas and make them real in the ordinary structure of their days. Visions of Vocation is rich with reflections on worthy books—by Simon Weil, Walker Percy, Alan Lightman, Chaim Potok, John Le Carré, and more. And Steve has a gentle but firm way of helping those of us who tend to resist much reflection on such things to pause, take notice, and realize both the cost of our resistance and the joy of new discovery.

Steve’s thesis involves a simple insight that is remarkably powerful in unlocking what it means to flourish as a human being in our broken world. The insight is that our work, done to God’s glory, is not merely acceptable to God, but that in our vocation, pursuing our calling, we serve God, extending his kingdom of grace.

The word vocation is a rich one, having to address the wholeness of life, the range of relationships and responsibilities. Work, yes, but also families, and neighbors, and citizenship, locally and globally—all of this and more is seen as vocation, that to which I am called as a human being, living my life before the face of God. It is never the same word as occupation, just as calling is never the same word as career. Sometimes, by grace, the words and the realities they represent do overlap, even significantly; sometimes, in the incompleteness of life in a fallen world, there is not much overlap at all.

As the vision statement of The Washington Institute (http://www.washingtoninst.org), puts it so well, Steve desires to “recover an understanding of faith that implicates people in every aspect of life, work, and pleasure for the sake of individual and societal flourishing.” Visions of Vocation allows us all to become part of that quest. From his vantage point in Washington, DC, Steve takes us with him to the State Department to meet with leaders of the Tiananmen protest, into the Senate dining room for a discussion with novelist Tom Wolfe, onto the tour bus of Jars of Clay as they commit to care about Africa with Blood:Water Mission, and into conversations with people whose daily life is in politics, business, art, homemaking, and hamburgers, for the common good. The book will not only act as a wise guide as you reflect on the desires of your heart in light of the reality of life in a broken world, it will enrich your imagination and mind, and invite you to further reading and thinking.