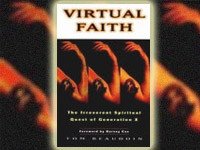 “This is a book about impropriety and irreverence, beginning with my fundamental claim that Generation X is —despite and even because of appearances—strikingly religious,” Tom Beaudoin writes. “We express our religious interests, dreams, fears, hopes, and desires through popular culture.” Beaudoin, a Catholic GenXer who studied with Harvey Cox at Harvard University School of Divinity, explores four interrelated themes in Virtual Faith: Generation X, pop culture, postmodern spirituality, and Christianity. In the process he develops a theology of pop culture and attempts to bridge the chasm that separates the church from the generation of unchurched young people who tend to find Christianity irrelevant, negative, and unattractive.