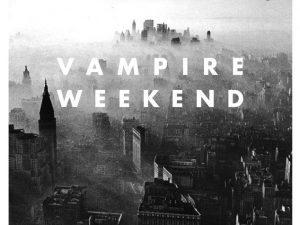 A soundtrack for our time
Vampire Weekend is four musicians who met as students at Columbia University. Modern Vampires of the City, their third studio album, is one of those rare CDs that is so remarkably good, so very thoughtful and beautifully crafted I felt badly I hadn’t purchased it earlier. The music and instrumentation fits the lyrics perfectly, and with creatively inventive sounds and solos full of yearning, Modern Vampires doesn’t merely reflect life but probes deeper with questions about things that matter most.

We know the fire awaits unbelievers
All of the sinners the same
Girl, you and I will die unbelievers
Bound to the track of the train
If I’m born again
I know that the world will disagree
Want a little grace but who’s gonna save a little grace for me?
[from “Unbelievers”]

Modern Vampires of the City strikes me as a thoughtful postmodern response to having heard something of the Christian message filtered through the sad cultural captivity that has locked the church in irrelevance. In “Ya Hey,” a thinly disguised play on God’s covenantal name, they wonder how it can be that so many could be so faithless if he is actually God. “Worship You” wonders at the exclusiveness of God’s desire for praise. And “Finger Back” faces the bleak brokenness of the world and the suffering that flows from it. Rolling Stone listed “Unbelievers” as one of the best singles of 2013, saying that in it the band “ponders the possibility of love in a godless age.” And the magazine ranked Modern Vampires of the City as the best album of the 2013.

Please listen to this music. Not only is it worth listening to, and worth liking, if you care about this world this is music you need to understand and appreciate. It is a thoughtful and vital soundtrack of our postmodern age.