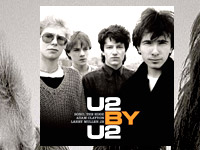 This large format book is full of pictures and commentary in which the band members tell the story of U2, remember highs and lows, and reflect on their remarkable music stretching over the years from 1960 through 2006.

Bono: “I always thought the job was to be as great as you could be.”

Edge: “We wore it as a stubborn badge of pride that we weren’t prepared to fall into line with every other group and take the fashionable stance of the day. We were uncool because we were hot, we just erupted as a live band.”

Adam Clayton: “We are trying to pin down something elusive, something that represents where we are, emotionally, physically, spiritually, but is also fresh and exciting. If it is not the absolutely best it can be, then why bother?”

Larry Mullen Jr: “I have read a lot of rubbish about U2. Sometimes when I see us described in some mythic sense or called corporate masters of our own destiny, I have to laugh out loud. Being in U2 is more riding a runaway train, hanging on to it for dear life.”

Those who have appreciated this remarkable group of artists and their creative music will probably already know of this book. Those who aren’t aware of U2 by U2 but who want to more deeply understand our culture and the role popular music plays in it should consider reading it. And all of us can use it as an excuse to listen again to their music as we allow the band members to reflect on each tour and album, in light of their lives and world.