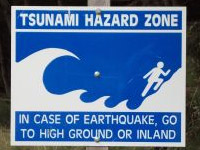 On December 26, 2004, the massive tectonic plates under the Indian Ocean shifted, and the most powerful earthquake in 4 decades rumbled across the sea floor off the coast of Sumatra. The quake caused the sea to heave, launching a tsunami that radiated out across the water to slam into the coasts of nearly a dozen countries. In many cases, the water at the ocean’s edge first receded, and then so quickly that it could not be outrun, the giant waves surged inland, sweeping up everything, and everyone in its path. Seven days later rescue units were only beginning to reach the most remote areas in the tsunami’s wake. With each high tide, bloated corpses of those sucked out to sea and drowned washed ashore. Survivors had lost shelter, numerous loved ones, livelihoods, food supplies, and perhaps most devastating, clean drinking water. Over 150,000 lives were lost in a matter of minutes, and many more could be lost over time, since epidemics of typhoid and cholera could easily break out, and so much will need to be done for so many to restore the basic necessities of life. The final death toll may never be known for sure, and the bodies of many of the missing may never be found.

Tragedies require a response. Various nations have sent aid, and individuals have been giving to charities and relief organizations. People are also speaking out, raising questions, suggesting responses, and trying to make sense of a seemingly senseless event.

For example, John Seel, a regular contributor to these pages, responded by writing a letter to the editor of his daily newspaper:

Letter to the Editor: Tsunami Disaster
On December 29, 1940, Franklin Roosevelt delivered a speech calling for America in the face of the menace of totalitarianism to be ‘the great arsenal of democracy.’ Today as we stand in lines to exchange our Christmas presents, the greatest humanitarian crisis of our lifetime is unfolding. Several days ago, I told my wife that I suspected the death toll from the tsunami disaster would exceed 100,000. Ironically, on the same day, the Dallas Morning News reported that this very ‘red’ city has the worse philanthropy record of any large city in America. We can join our voices to those pundits who decry Washington’s paltry response to date. But far more significant would be for every Christian in this city to send $100 or more to an organization that is scrambling to respond. The world has come to hate American foreign policy. Most of those killed in this week’s disaster are Hindus and Muslims. This is a unique opportunity to demonstrate that American justice is not spelled ‘just us.’ Christians need to stop talking about the End Times and start showing some true religion. ‘Religion God our Father accepts as pure and faultless is this: to look after orphans and widows’ (James 1:27). This week they have been give a name and face. – John Seel, Dallas

And because we live in a religiously pluralistic world, Christian voices are not the only ones that are being heard. For example, the BBC posted responses online from believers of various faiths as to how they understood the Indian Ocean tsunami.

From a Hindu, Rani Moorthy, an actress and writer:
The tsunami brings into question both personal and collective destinies for Hindus. In terms of the latter, we are born in an age of destruction, known as Kali Yuga, an age that lasts for perhaps 1,000 years. This says that we must go through a series of set-backs, obstacles, suffering, eg AIDS, and a propensity for natural disasters as nature shows its malevolent side. Mankind goes through this to be renewed.

As for my personal destiny, there is no central text in Hinduism as there is in other religions so it’s up to each of us to formulate our own understanding, based on the Brahman—the divine—and the belief that all of us will one day escape the endless cycle of birth and death and be returned to our maker. My belief is that I am connected to all humans and so while I grieve for those that have died in the tsunami, I don’t feel sorry for them because they are part of me and part of the divine. Their deaths are a manifestation of karma, the debits and credits you amass through your series of lives.

From a Buddhist, Lama Ole Nydahl, a teacher of Diamond Way Buddhism:
We all die, sooner or later. Some have conditions for living long lives and some for short lives. That is your karma—the total effect of one’s actions and conduct. What might have precipitated the tsunami was a lot of people coming together who had the karma for a short life and, to an extent, this is perhaps a reflection that these areas were over-populated.

The shifting of tectonic plates is inevitable, but fewer people in the areas affected would have led to a much smaller loss of life. When watching the TV news, reading the papers or thinking about the tsunami, we are thinking about the Buddha we like the best—perhaps the Red Buddha, the Buddha of limitless light. We do this so that when those who died in the disaster wake up from the shock of dying—we believe it takes about three days to do so—they will be sent up to the Buddha we have in mind. Buddhists think the mind is indestructible so, after a while, if one wants to and is able, they will have the choice to take rebirth in society as beings who help others.

From a Muslim, Iqbal Sacranie, Secretary General of the Muslim Council of Britain:
It is the teaching of Islam that it is through the will of God Almighty that this has happened but then the positive side is the way mankind has reacted. People will question why it is taking place, why the enormity of loss of human life, but it is that aspect which is beyond us and it is our firm belief that any such disaster, anything of that nature happening, is through the will of God Almighty. Allah knows best.

We certainly have the right to question. It’s a time for us to really think of ourselves, our deeds, our acts, and we need to ponder over this. It’s a sign that none of us are going to live for an indefinite period, therefore it is a sign for us to do something very positive. Death always takes place. When a person is born one thing guaranteed is death but what form it takes is always beyond us. People of faith need to have a very firm belief in God Almighty, that at the end of the day it is through his will and it is for the betterment of mankind at large.

From an atheist, Hanne Stinson, Executive Director of the British Humanist Association:
Religion cannot provide an explanation for the tsunami, and while prayer for the victims may comfort those who pray, it will not provide practical help to the people whose lives have been devastated by this appalling disaster. Science can explain earthquakes and tsunamis, even if we are still unable to predict where and when they will happen. Our response to this and other disasters, as compassionate human beings and regardless of our religious or non-religious beliefs, must be to provide whatever help we can.

Faith in god does not protect people from disasters or give the victims what they need to survive and rebuild their lives. We need to accept responsibility for our fellow human beings. We need to put our efforts into practical ways of preventing disasters when we can, preparing for disasters that cannot be prevented, including investing in early warning systems for tsunamis, and helping those affected by disasters. We cannot rely on any god to solve the world’s problems. We—the people of the world—are humanity’s only hope.

How should we respond as Christians to the Indian Ocean tsunami? How do we explain a calamity like this in light of our profession to believe in a sovereign, good, and all-powerful God? And how can we express our beliefs and live in a way that those who don’t share our convictions might be able to understand something of the gospel?

It’s worth some careful reflection and discussion.

2. Thomas Howard has commented that only God is capable of seeing the full extent of the Fall without lapsing into hopelessness, despair, or cynicism. The problem with the news media, then, is that its strength is also its danger, namely, it provides so much information that we can be easily overwhelmed. Howard says that we should be careful to watch ourselves, and the test is that learning of the effects of the Fall should prompt us to prayer, fasting, and wise action. With this as a guide, what plans should you make about your consumption of the “news”? To what extent do you display hopelessness, despair, or cynicism that needs to be repented of?

4. Each person holds some sort of world view, a set of basic beliefs about things that is the lens through which they see and make sense of life. Tragedies like the Indian Ocean tsunami can cause people to doubt their basic beliefs, or to challenge those of others which don’t seem to be helpful in sorting out the meaning of the tragedy. Christians might find, for example, their belief in the existence of an infinite, personal, loving God being challenged. Where was your God on December 26, 2004? If he could have stopped it, why didn’t he? So, our challenge in all this is three-fold: first, to be sure we hold a balanced, nuanced biblical view; second, be able to talk about and live it out creatively; and third, provide creative and thoughtful responses to those who propose an alternate world view. How much progress have you made in this? What plans do you need to make? What questions and doubts have been raised (in your mind or by others) by the calamity? What responses have you heard by Christians that have been unhelpful? That have been helpful?

5. The brief statements posted by the BBC suggest a series of tasks it would be helpful to perform. First, write a Christian explanation of the tragedy—maximum 200 words—that you would like to see posted on the BBC site, alongside these. (After writing it, you may want to compare it to the one posted by the BBC by a Christian.) And finally, write a brief response—again, maximum 200 words—to each of the other postings, a response that is designed to generate conversation and reflection.

The BBC material was sent to me by Ellis Potter, to whom I am very grateful, and can be found online (http://news.bbc.co.uk/1/hi/magazine/4138095.stm).