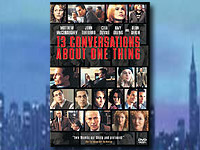 Very occasionally a movie comes along that raises so many important issues, so clearly, so compellingly, that discussing it with friends seems mandatory. 13 Conversations is one of those films. It allows us to watch three groups of ordinary people pursuing the ordinary events of their lives. Though they don’t know one another, their lives are intertwined. The film is divided by title screens into thirteen vignettes, each containing a conversation about one thing. The one thing we all talk about: whether happiness, significance and meaningful relationships can be found in a world that is not only broken, but where life is finally beyond our control. The conversations unfold throughout the film, following the trajectory of each character’s life. One person’s answer prompts a question in someone else, good things do not always happen to good people, tragedy can strike when we least expect it, and contentment is fleeting in a world in which disappointment and suffering lurk just around the corner.

13 Conversations is a remarkable window of insight into the lives of people who are just like us, finite creatures who yearn for meaningful relationships in a world in which honesty compels us to face the fact that try as we might, very little in life turns out exactly as we had planned. There are no easy answers here, nor a tidy ending—as if the film’s producers expect the 14th conversation to be ours.

We meet Troy, an attorney celebrating a court victory who will flee from an accident after the party. As a prosecutor it has been easy for him to assume the accused are always guilty, but now he discovers that he has far more in common with the felons than he had ever imagined. Though his involvement is never discovered, the guilt over his wrong choice slowly corrodes his soul. We meet Walker, an engineering professor whose marriage and life, unlike the tidy and predictable formulas which direct the cosmos, are spiraling out of control. We meet Gene, an insurance company manager who has, in Walker Percy’s memorable line, achieved success but failed at life. Alienated and bitter, Gene lives alone and only sees his former wife when they meet in court at the trial of their wayward son, a petty thief and drug addict. His company is facing hard times, and the guileless happiness of one of Gene’s employees seems to mock his very existence, prompting him to act. And we meet Beatrice, an honest, simple, hard working maid whose optimism is shattered by suffering and distrust. For all her life she has lived in light of a mystical experience she had when rescued from drowning as a child, but now she sees the world as a dark place. “You’ve changed,” her friend tells her. “I’m just like everyone else,” Beatrice replies.

We meet these characters in 13 Conversations, listen to them talk, watch them live, and are drawn into their search for significance, for happiness, and for someone who in the end, will be there for them. Their choices and settings are unremarkable, but the film is compelling in the way it forces us to see ourselves, and our friends and neighbors, in the characters. The imaginary world conjured up in this film is the world we live in. Broken, but full of people who yearn for redemption, even if they never use that term.

13 Conversations was a labor of love. Sisters Jill and Karen Sprecher (who directed and co-wrote it) went deeply into debt to produce this film. Jill studied literature and philosophy at the University of Madison, and some of the movie’s most poignant scenes are inspired by true events from her life. Soon after arriving in New York in 1985, she was mugged, hit over the head, and less than a year later was mugged again. Alarmed and despondent as she tried to make a living in the world of independent film, she was cheered one day when a stranger on the subway made simple human contact—by smiling. These extraordinarily ordinary events, along with Bertrand Russell’s book, The Conquest of Happiness, gave birth to this thoughtful and sensitive film.

“Movies are finally, centrally, crucially, primarily, only about story,” Brian Godawa says. “And those stories are finally, centrally, crucially, primarily, mostly about redemption.” 13 Conversations is not sentimental, but insists we see life as it truly is in this fallen world. It is also not unremittingly dark. Each character receives some measure of grace, some kindness, some insight, which allows them at least a glimmer of hope while they continue to walk through a world which is simultaneously broken and glorious.

You will need to watch the film more than once to keep all the details straight—I certainly did—but it is well worth the effort. Watch it, and then use it as a point of contact to discuss with friends, Christians and non-Christians, the one thing that matters most.

1. Many people have reacted to this film gushingly, and an equal number have called it slow and boring—few react indifferently. What was your reaction, and why do you think the film elicits such disparaging reactions, such strong reactions? 2. What mood does the opening music create? The music director calls the score “music from the perspective of God;” why does he say that? 3. How is the music employed throughout the film? Do you feel that the music forces a mood upon you, or is it appropriately placed? 4. How are colors used in the film? 5. In the film, we never see the sun directly. Only a few times do we see sunlight. What is the effect of this absence of the sun? When we do see sunlight, where is it, how do we see it (refractions, etc.), and what does it indicate? 6. The film begins and ends with the same woman looking through a window. Why does the director do this? Is it effective? Has the woman changed any between the scenes, and if so, how? 7. Does the film employ any consistent symbols, metaphors, images? If so, what is their purpose? Is the non-chronological sequencing of the narrative confusing? Why do you think the director chose this method (for what effect?) 8. The characters in the film represent many different personality types. Did you identify with any of them? Did that affect the way you viewed the other characters? Is the film’s tying together of five seemingly disparate lives believable? Do you think the film parallels reality in this way? 9. How does the director use physical damage and consequent healing in the film? 10. How do your physical circumstances dictate your emotional and intellectual outlook on life? 11. As connections develop between characters, we realize that the characters themselves don’t plan them. Being unplanned, how do you label them? 12. As “fate,” “coincidence,” “providence?” Does it matter what we call them? 13. The characters repeatedly meditate upon what they “want” in life. What do you think they want? Are their wants legitimate? What do you want in life? 14. Is it legitimate to desire “happiness?” How do people define “happiness” differently? Is “happiness” something that we deserve; is it something that we can earn? 15. Is it okay to meditate on what our lives would look like “if things had happened differently?” Is life really “irreversible,” and, depending on your answer, what does this reveal about your understanding of the world you live in? Can we ever start over? Are people better off living under an illusion? 16. In the opening bar scene, Troy says that people want to be held responsible for their actions; they want proof that there’s order. Do you find this to be true? And what does your answer indicate about human nature? 17. Troy mentions repeatedly that he’s tired of feeling guilty, in so many words. How do we deal with feelings of guilt, and are our feelings always warranted? Christians claim that they have a remedy for their guilt; how do you feel about that? How do Christians abuse that? Does their abuse imply that real satisfaction for guilt doesn’t exist? Walker is driven by escaping a life of predictability, of routine. Why do we long to escape, even despise, routine, the common-place? 18. Why doesn’t Walker allow the student to re-take the test? In class, he says that “the laws of the universe are absolute.” Do you agree, and what does that reveal about your understanding of the world you live in? What good reasons do we have for giving people second chances, for extending mercy to them? 19. Beatrice’s early vision, while drowning, dictates her view on life up until the car accident, so that she says she was “saved for a reason” and repudiates the assertion that “life isn’t fair.” Do you think we should base our lives on such “signs?” What does Beatrice’s eventual repudiation and subsequent re-acceptance of her previous beliefs indicate about the power of her “visions?” Why do people want tangible “proof” of the existence of God? Is the desire legitimate? If you don’t believe in God, on what basis do you require such proof? 20. Smiley Bowman seems to be constantly optimistic. Is it a show, or is he really that way? Can someone be truly happy? If this life is all that we have, how does that determine the way we answer that question? How do we determine whether our individual “happiness” is good or bad (i.e. killing makes some people happy, so if “happiness” is a legitimate desire, how do we reconcile the two?) 21. Why does Gene think Smiley’s “hiding something?” Is he envious, or realistic? Why does Smiley get under his skin so much? How do you react to people who seem to get all the breaks, and what does this reveal about you? Why does Gene try to help Smiley get a job, despite the fact that he has to swallow his pride? 22. One of the characters says, “Ask yourself if you’re happy, and you cease to be.” This is a quote from John Stuart Mill, a philosophical utilitarianist. What do you think this means, and do you agree with it? 23. Suicide seems to be on the horizon for a number of main characters in the film. Why do you think none of them decided to commit suicide? 24. Do we get second chances in life? If so, why might we refuse to accept them? 25. One of the characters says that faith is “the antithesis of proof.” How would you respond to that statement? On what note do you think the film ends? What emotion do you leave the film with?