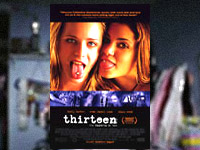 When Nikki Reed was two years old, her parents divorced. Three years later Nikki’s father began dating Catherine Hardwicke, who worked in film as a production designer and who quickly grew to love Nikki. When the dating relationship ended four years later, Catherine continued to spend time regularly with Nikki. As Nikki approached adolescence, Catherine left for a year to work on a movie that was being filmed in Canada. She returned when Nikki was twelve, but her young friend had changed. “She started getting really angry,” Catherine remembers, “really angry with her mom, really angry at her dad, angry at her brother, hating everybody, hating herself, and she was just kinda obsessed with living up to the beauty thing. Two hours before seventh grade doing hair, make-up… So I saw all this stuff, and I thought, ‘Wow, maybe I could do something that could give her a little bit more creative stuff to do.’”

Rather than back away, Catherine took Nikki to museums and galleries, taught her to surf, and introduced her to Jane Austen. Nikki refused to read Pride and Prejudice, but when she expressed an interest in acting, Catherine decided they should write a screenplay together. They tried to write a teen comedy, but got nowhere. As they talked, Nikki let Catherine see into the reality of her world, the world of youth culture: the intense peer pressure to conform; the cruelty the “hot girls” systematically inflicted on those who didn’t measure up; the ubiquitous messages from the media and advertising about body image; the fragmentation of family and life; the easy availability of drugs; the despair that leads to cutting and eating disorders; the deep confusion about meaning; the yearning for someone to be there for them; and how hooking up in casual sex is merely a form of entertainment to interrupt the incessant boredom.

A year later, they had the screenplay for Thirteen, in which then 14 year old Nikki Reed plays the character Evie Zamora, “the hot” bad girl who induces former A-student Tracy, played by Evan Rachel Wood, into a destructive spiral of rebellion, deceit, and immorality. “I think it’s a story anyone my age can relate to,” Evan says, “because it’s about that time when you’re not a kid and you’re not an adult so you don’t really know who you are but at the same time you want so badly to be accepted. And sometimes I think you let the wrong people into your life because you have no place else to go.”

One of the wonders of the cinema is that a well-made film can transport you into a world you have never before entered. It could be into the past, as in A Man for All Seasons so we can walk with Sir Thomas Moore from the palace to the Tower to the gallows. Or into the future, as in Bladerunner, when androids look so human that it becomes difficult to know the difference between a person and a machine. Or into another culture, as in Whale Rider, where a discouraged Maori chief and his irrepressible granddaughter make ancestor worship and ancient pagan ritual appear attractive. And sometimes a film opens our eyes to the world we already live in, but have failed to see clearly enough.

Margie and I work hard to keep our fingers on the pulse of our postmodern world. None of the themes which are woven into Thirteen are new to us. We know about the constant barrage of pressure that descends on young people concerning body image—and know that no one who lives in our culture can escape the relentless messages that are displayed on billboards, magazine covers, and even many Christian publications. We are concerned for the fragmentation that is tearing apart families, producing a painful confusion and deep anger in an entire generation. We know how numb so many young people feel, and how for some, cutting themselves brings a moment of relief, a reassurance that they are, after all, alive. We hear questions and confusion in their music, and see in their eyes the yearning that someone would be there for them. None of this is new to us, and yet we are glad we watched Thirteen. Though we have been graced by young people willing to let us into their broken lives, this powerfully disturbing film helps us see more clearly how their world looks from the inside. Seeing more clearly drives us to pray, to listen with greater attention, and to be sure our explanation of the gospel fits their need and questions.

Though I am pleased for Catherine Hardwicke that Thirteen, the first film she directed, won a number of awards, I suspect that her role in Nikki Reed’s life may bring her the deepest sense of fulfillment. Meaningful relationships with young adults can be messy, costly in time and energy. Catherine Hardwicke is a model of the mentoring we are called to in the Scriptures. May we be as faithful as she has been. Not just with our own children, but with their friends.

1. What was your reaction to the film? Trace the various emotions that were evoked as the story unfolded. Why do you think you reacted the way you did? 2. What scenes in the film stand out to you? Why? 3. In what ways were the techniques of film-making (casting, direction, lighting, script, music, sets, action, cinematography, editing, etc.) used to get the film’s message(s) across, or to make the message plausible or compelling? In what ways were they ineffective or misused? 4. Consider the pace of the film, how it was photographed and edited. “We shared this idea that Thirteen is a movie of spirit,” cinematographer Elliot Davis says, “a movie in which, visually, form and function have to merge. It’s an entirely subjective, first-person point of view; we wanted to be right there with them, to have the camera be part of the action, to be hovering around Tracy and Evie unobtrusively, but inviting you into this world.” Was this goal achieved? “Thirteen is definitely true to my 13th year,” Nikki Reed said in an interview, “but I can’t say it’s autobiographical because, if I do, then everyone would assume that every detail in the movie happened to me, and it didn’t. There were things in my life that happened, but not necessarily like that.” How does the story behind the making of Thirteen effect your view of the movie? 5. In youthculture@today, the good folks at the Center for Parent/Youth Understanding say this about Thirteen: “The film accurately portrays the reality of adolescent life in a sinful and fallen world. While not pretty, the depiction includes a host of behaviors and social issues today’s children and teens not only encounter, but pursue in their quest for redemption.” To what extent did the film reveal or clarify aspects of youth culture about which you were unaware? Where have you felt peer pressure most keenly? How have you dealt with it? 6. How would you describe the “body image” that is projected by youth culture? How has this image effected you? Your friends and co-workers? How powerful is the pressure concerning having the correct body image? Is the church free of such pressures? 7. “These independent, ambitious girls are a far cry from the repressed, pretty-in-pink generations of the past,” it says on the Thirteen movie website. “But what does it mean that just when they’re most vulnerable, when they’re first experiencing the spoils of a hard-won sense of self-confidence, that they’re also spending huge amounts of energy (and cash) trying to become an abstract ideal of hip, cool and popular?” Discuss. 8. How does Thirteen tell its story without exploiting the youth culture it exposes? How does the director reveal, for example, the negative results of Melanie’s divorce, the sadness of the casual sex, and the horror of Tracy’s cutting without glorifying them? How does the director manage to portray a positive or redemptive message in such a sad film without becoming preachy or propagandistic? 9. From CPYU: “Thirteen is not intended to be an entertaining film. Rather it is a film designed to portray reality and goes a step further by offering commentary on the results of adopting the lifestyles portrayed... While the film fails to overtly mention or include God in the message, those who watch from a Christian perspective will hear screams of ‘I need God’ from each lost character.” Do you agree? Why or why not? Could a Christian have made this film? 10. With whom did you identify in the film? Why? With whom were we meant to identify? Discuss each main character in the film and their significance to the story. Melanie, played by Holly Hunter, is Tracy’s single mom in Thirteen. Though she loves Tracy deeply, yet she feels overwhelmed by the challenge of her daughter’s rebellion, unsure how to parent, and is blind to some of what Tracy is doing. How easy is it for parents to experience something similar with their own children? At such times, when parents who happen to have compliant children give advice, how does that advice sound to the struggling parent? 11. How can we raise our children to know, love, and serve God in a world dominated by youth culture? How can we help one another in this process? Do we have an added responsibility to single parents? How would they like us to fulfill that responsibility? 12. How can we train and disciple our children—physical and spiritual—to befriend, love, and engage their peers with the gospel? How can walk alongside them in the process? 13. What does the church need to do and be to become a shelter of grace with an attractive message to those of the postmodern generation caught up in youth culture? 14. What will it cost us to open our homes in warm hospitality to young people from fragmented backgrounds? How can we live our lives in order to offer them the gift of unhurried time? 15. In her loving and faithful relationship with Nikki Reed, Catherine Hardwicke models what it looks like to be a mentor to a young person, even during the hard times. And it wasn’t a quick process—Nikki has said in interviews that it took a year before her relationships, especially with her mother, began mending. What might we learn from Catherine’s example?