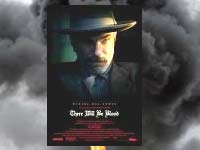 Drained Dry: oil, religion and the shriveling of souls
There Will be Blood is a brutally honest, brutally violent film. Greedy souls are dissected in plain view on the screen, hard souls for whom truth is a weapon, wealth is a god, and power is embraced in an unrelenting push to win, regardless of the cost. In a world where the possibility of truth is doubted and where evil is often reduced to genetic or environmental determinism, There Will be Blood proclaims that wickedness is real and is profoundly, violently destructive to all that is beautiful and human and noble.

Adapting the story for the screen allows an image to burn itself into our memory, a symbol of progress that acts as a metaphor for the corrosive action of evil within the human heart. “There was a tower of flame,” Sinclair writes, “and the most amazing spectacle—the burning oil would hit the ground, and bounce up, and explode, and leap again and fall again, and great red masses of flame would unfold, and burst, and yield black masses of smoke, and these in turn red. Mountains of smoke rose to the sky, and mountains of flame came seething down to the earth; every jet that struck the ground turned into a volcano, and rose again, higher than before; the whole mass, boiling and bursting, became a river of fire, a lava flood that went streaming down the valley, turning everything it touched into flame, then swallowing it up and hiding the flames in a cloud of smoke.” There Will be Blood is a visual epic, scenes so carefully crafted that we are not merely drawn into the story but made a part of it. This is, whether we like it or not, the world in which we live and of which we are a part.

My friend Steve Garber commented that as he watched There Will be Blood he couldn’t stop thinking that writer/director Paul Thomas Anderson was channeling Flannery O’Connor. Like O’Connor, Anderson is a Roman Catholic who takes faith seriously. If you doubt that, watch his 1999 film, Magnolia, a story of sin, grace, and the desperate search for forgiveness in the face of guilt and death. Both O’Connor and Anderson understand that speaking truth requires creativity in a secularized or skeptical culture. “When you can assume that your audience holds the same beliefs as you do, you can relax a little and use more normal means of talking to it,” O’Connor said. “When you have to assume that it does not, then you have to make your vision apparent by shock, to the hard of hearing you shout, and for the almost-blind, you draw large and startling figures.”

One of the highlights of There Will be Blood is the musical score. Composed, played and conducted by Jonny Greenwood, the classically trained musician best known as the lead guitarist for Radiohead. It is a “sweeping, surging, constantly surprising score,” Todd McCarthey notes in Variety, “which could be described as avant-garde symphonic. It’s a daring, adventurous, exploratory piece of work, one that on its own signals the picture’s seriousness.”

“The truth does not change according to our ability to stomach it,” Flannery O’Connor said. There Will be Blood reminds us that what we worship, in commerce or in religion, will define what we will be like. Mistakes here are not just unfortunate, but deadly.

1. What was your immediate or initial response to There Will be Blood? Why do you think you responded as you did? 2. In what ways were the techniques of film-making (casting, direction, lighting, script, music, sets and backgrounds, action, cinematography, editing, etc.) used to get the film’s message(s) across, or to make the message plausible or compelling? In what ways were they ineffective or misused? How did Jonny Greenwood’s music help tell the story? 3. Identify and describe, as objectively as possible, each of the main characters in the story. What is their role and significance? With whom do you identify? With whom are we meant to identify? 4. Is the story simply a tale about the oil business, or is oil a metaphor for something larger? 5. Some have interpreted the film as an attack on America, or on the free market, or on organized religion. How would you respond? 6. Two recent films, There Will be Blood and No Country for Old Men, are similar in that both depicted violence graphically. Why did these stories require this imagery? 7. What questions do you think There Will be Blood asks of our skeptical culture? What questions does it ask of the church?