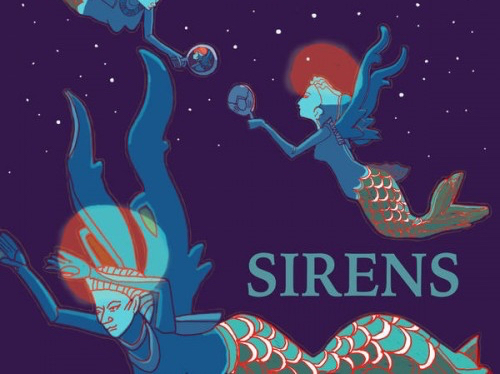 This is not the way I thought it would be
Sirens (2015), the first full-length album by The Weepies in five years, released after Deb Talan, half the folk duo group successfully completed treatment for cancer, weaves a lovely fabric of quiet wistfulness, a palpable desire to make sense of life in a world that is not as it was meant to be.

This is not the sound of artists raging against the unrelenting brokenness that haunts our steps, nor is there any hint of bitterness against the way hard times are distributed so unfairly. Deb Talan and Steve Tannen are musicians who love one another and find in their relationship a hint of hope that makes even the sadness bearable.

“Referencing both the doppler ambulance wails and the mermaid-like mythical creatures that lead sailors to shipwreck with its title,” Paste notes, “Sirens is not thematically a ‘cancer album.’ Rather, it’s an album that happened to be made while battling and recovering from the disease.” And rather than focus on just that struggle, Talan and Tannen use it as a chance to see more widely and reflect more deeply on the human condition we all share. They sing of regret over broken relationships (“Ever Said Goodbye”), gender dysphoria (“Boys Who Want to be Girls”), friends lost over time (“River From the Sky”), and the risk taken to love someone (“Fancy Things”).

Musically Sirens is deeply compelling, and appropriately was recorded in Talan and Tannen’s Iowa home. The couple is joined by a wonderful group of musicians as backup—many of them unable to travel to Iowa and so recording tracks wherever they happened to be at the moment, including Pete Thomas and Steve Nieve (Elvis Costello), Gerry Leonard (David Bowie), Rami Jaffee (Foo Fighters), Tony Levin (Peter Gabriel), Oliver Kraus (Sia) and Matt Chamberlain (Pearl Jam).

Unless we’ve become numb to reality that is exactly right. With Sirens, The Weepies help us renew our deeply needed, human yearning for hope.