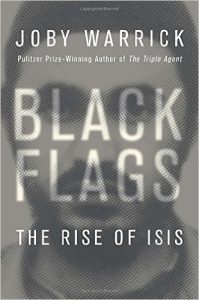 The Story of ISIS
If you are like me, a great deal of the conflict that roils the Middle East is rather unclear. Perhaps most unclear is the terrorism that darkens the news day after day. How do we make sense of the Islamic State—ISIS, ISIL, DAESH—and what policies should we support in order to stop it? How did Zarqawi—a name often in the news until his death in 2006—give birth to the movement, what is his legacy and what is the significance of al-Baghdadi declaring himself caliph in 2014? Who are these brutal people? Why are some young adults living in the West and in modern states in the Middle East drawn to join ISIS even at the cost of their lives? Just what is the attraction?

ISIS is a present reality that is shrouded in mystery. I know the talking points put forward by commentators on the left and the right, and the policies developed by the United States but they do not probe deeply enough. Keeping up with the news provides snippets of insight, but is also insufficient. Thankfully there is now an accessible, readable book that helps to fill in some crucial gaps in our understanding.

Joby Warrick is a Pulizer Prize winning journalist who works for The Washington Post. He has followed ISIS from the start as a reporter, and in Black Flags: The Rise of ISIS helps us to understand a phenomenon that is far away yet threatens to bring its violence very close to home. Part history, part biography, part current events, Black Flags traces the rise of ISIS, the problems and grievances that were the fertile soil in which they grew, and the cast of characters that made it possible. And part of the story Warrick tells is the difficulty diplomats face in sorting all the details out in real time, and how some analysts anticipated that ISIS would eclipse al-Qaeda but whose warnings were ignored.

Black Flags reads like a novel, fast paced and clearly written. Warrick leads us through a thicket of unfamiliar names and places helping us make sense of something that in almost every way is foreign to the experience and mindset of the average American. The book is factual and carefully researched, but is structured like a mystery as reporters, spooks and analysts sort through masses of raw data from the Middle East to piece together the story of an amazingly effective and pitiless military force that has spread brutality across the world.

In the past wars have tended to be relatively neat if horrible and bloody, affairs. One nation fields an army in uniform against another and they battle until one surrenders or is destroyed. The 21st century has ushered in a new age, where the old rules no longer apply, and where new strategies will have to be developed by those who yearn for justice and peace.

As Americans we tend, I think, to see the Middle East as a group of nations. We fail to appreciate how the people spread across those nations do not necessarily identify themselves primarily as citizens of those nations but as members of tribes and language groups with a much more ancient heritage. We fail to understand how the nations themselves are not the natural groupings of the people in the region but are instead artificial boundaries established by the Western nations who won the 1st world war and carved up the Ottoman Empire in ways that benefited their dreams of empire. Old grievances and divisions, and a deep sense of humiliation cast a dark shadow across the social imaginaries of the people who live in these nations. Catch even a glimpse of this sad reality and it is easy to understand why even if ISIS is routed militarily, it may not thereby be defeated.

I recommend Black Flags to you. Joby Warrick’s journalistic gifts are a grace in a world difficult to comprehend.