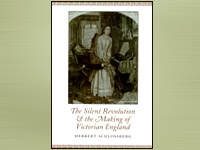 Many Christians seem clear about their desire for reformation and revival, but they are sometimes less clear when asked to describe exactly what this movement of God’s Spirit would look like in our decaying culture. Or what Christians might choose to do—besides prayer—that might serve to prepare the stage for such an event. One way to shed light on this question is to develop a theology of revival, such as Richard Lovelace’s helpful study in Dynamics of Spiritual Life. Another helpful approach would be to study earlier revivals, which is what historian Herbert Schlossberg has done in his new book The Silent Revolution and the Making of Victorian England. This is serious history, carefully footnoted throughout; but it is also a fascinating and well-told story of how the evangelical revival of Wesley, Whitefield, and Wilberforce swept through and transformed a decadent society.

When Queen Victoria assumed the throne in 1837, the transformation known (and sometime derided) as “Victorianism” was already in place. And though far from perfect, Schlossberg argues it represented a transformation of English culture that was so profound that only the term revolution does it justice. Slavery was abolished, education was revitalized, the church reformed, the poverty of the masses was addressed, and morals and manners were renewed.

“The idea of the pre-Victorian period as a revolutionary one is not new,” Schlossberg writes.

When the French social observer Alexis de Tocqueville arrived in England in 1833, he thought the country had experienced a great revolution that was still in progress. The key lay in his meaning of the term revolution, which he defined as “any fundamental change in the law, or any social transformation, or any substitution of one regulating principle for another.” He explicitly did not mean “a violent or sudden change.” He might have gone on to describe that English revolution as a greater one than that of his homeland, which, after all, was followed by a succession of republics, monarchies, and empires. It is hard to see that the life of the typical French citizen (or subject) changed much in the course of this or that political convulsion, if we except the trail of bodies left in its wake, whereas the cultural revolution of which he spoke changed England profoundly and for many decades.

What sort of change did Tocqueville have in mind when he wrote of the English revolution? Consider his account of a luncheon at the Earl of Radnor’s house on May 27, 1835: “Before coming to table Lord Radnor went to his study; Lady Radnor and his daughters went there too; after a moment eleven or twelve women and eight or ten men-servants came in… These twenty people took their places round the room and knelt down looking towards the wall. Near the fireplace Lord and Lady Radnor and Lady Louisa knelt down too, and Lord Radnor read a prayer aloud, the servants giving the responses. This sort of little service lasted six or eight minutes, after which the male and female servants got up and went out in the same order to resume their work.” And Tocqueville described Lord Radnor, because of his political affiliations, as a radical. Everywhere Tocqueville traveled in England he saw this sort of devotional exercise, which he knew very well he would not have seen a half century earlier. Of course, if that had been all that happened, just a little ceremony superimposed upon the same set of habits and relationships, it would have had little meaning. But Tocqueville observed that the culture had changed in profound ways that were symbolized by such ceremonies, and that is why he called the changes revolutionary.

The Silent Revolution is a story of Christian faithfulness in the midst of mistakes, discouragement, and cultural decadence. It is also a story of the grace of God in causing the gospel to ripple out across an entire society. Read it to be encouraged, to learn the lessons of the past, and to be reminded to pray to the One who continues to work in human history. Read it also to be reminded that we must be people of hope and faithfulness even when all around us seems dark. By the end of the period covered in this book, the revival was already beginning to unwind. Dr. Schlossberg is presently at work writing the story of that decline.

We recommend The Silent Revolution to you.