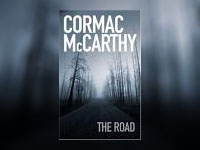 They are on a road, alone, surrounded by devastation, blasted by the cold. Houses stand empty, doors ajar, windows broken, floors and ceilings buckling from moisture seeping in from slowly disintegrating roofs. Whatever belongings the buildings once contained have long since been pillaged, sorted through by the few desperate survivors in a largely dead world. Mummified corpses litter streets in towns that now are rows of abandoned structures separated by crumbling streets. Buses, cars, and trucks are rusting hulks, useless and still.

Trees stand skeletal against the sky, dry and lifeless, bushes, weeds and grass all crumble when touched. Rivers and creeks flow sluggishly, leaden, black, and sour. A gray coating of ash falls from the sky, like snow, with snow, so that everything is gray, including the sky, so that the sun is merely a glow in a perpetual shadowy gloom. Two figures are moving painfully towards the coast, a father and his son, filthy, starving, their meager possessions–tattered blankets, jars of water, a few corroded cans of food, a plastic tarp, a rusty revolver with two shells–in a grocery cart.

On the far side of the river valley the road passed through a stark black burn. Charred and limbless trunks of trees stretching away on every side. Ash moving over the road and the sagging hands of blind wire strung from the blackened lightpoles whining thinly in the wind. A burned house in a clearing and beyond that a reach of meadowlands stark and gray and a raw red mudbank where roadworks lay abandoned. Farther along were billboards advertising motels. Everything as it once had been save faded and weathered. At the top of the hill they stood in the cold and the wind, getting their breath. He looked at the boy. I’m all right, the boy said. The man put his hand on his shoulder and nodded toward the open country below them. He got the binoculars out of the cart and stood in the road and glassed the plain down there where the shape of a city stood in the grayness like a charcoal drawing sketched across the waste. Nothing to see. No smoke. Can I see? The boy said. Yes. Of course you can. The boy leaned on the cart and adjusted the wheel. What do you see? The man said. Nothing. He lowered the glasses. It’s raining. Yes, the man said. I know.

The landscape in The Road is crisscrossed by the aftermath of uncontrolled fires, trees now blackened stumps, buildings reduced to ash, the asphalt of the road blistered from the deadly heat. The man and his son occasionally meet others, occasional stragglers like themselves, near death, or skulking gangs reduced to cannibalism. Cormac McCarthy writes spare prose, stripping dialogue of quotation marks as if such finery were unneeded when life is parsed down to the bare essentials. His stories are not meant to comfort but to provoke, not meant to set us at ease but to force us to reflect on the things that matter most. They are simple stories yet compelling, powerful in their quiet insistence that contrary to the popular lies of our postmodern world, there is no escape from the demands of reality.

In No Country for Old Men, McCarthy he asks us–no, he forces us–to consider the existence of evil. In The Road, set in an undated time after some apocalyptic cataclysm, he asks us to consider the meaning of humanity, of life, and of history. It is as if McCarthy knows these are not popular conversations to have and so he uses violence to focus our attention. He knows the simplistic and insufficient answers often given and instead of bothering to refute them, takes us into a story in which those answers could not possibly be seriously entertained.

The Road is not a depressing story, nor do I think it is meant to be. It is terrifying. Not in the sense of simply being scary, though there are tense moments in the struggle to stay alive, to do what the good people do when trying to escape those who are bad. Life is stripped to the bare essentials, to little more than mere survival, so that we face our existence and wonder why we are here, what it means, whether God is, and where we are going.

I will not reveal how The Road ends, except to say that it caused my heart to sing. I have no idea whether in a hundred years the stories of Cormac McCarthy will be considered classics. I do know they are important for our postmodern world, piercing our easy cynicism with a dose of reality too powerful to ignore and too compelling to dismiss. We are on a pilgrimage, McCarthy reminds us, with death at our heels, and we’d be wise to keep our eyes peeled for scattered signs of meaning.

1. What was your emotional reaction to The Road? Why do you think you responded to the story as you did?

2. Read aloud a few sections that especially stood out to you as compelling. What was it that impacted you?

3. As objectively as possible, consider Cormac McCarthy's writing style--his use of words, lack of chapter divisions, use of grammar and punctuation, descriptions, etc. Was it effective for the telling of this story or did you find it distracting?

4. Using words and phrases from the book itself, describe the characters, beginning with the man and his son, then the man's wife and the others they meet on the road.

5. What do you think is the significance of that fact that McCarthy never provides names for either the father or son?

6. One of the criticisms of the book involves the suicide of the wife--how does this fact impact the story?

7. How does McCarthy use dreams and flashbacks in The Road?

8. What is (are) the major theme(s)? How does McCarthy raise them in the process of telling his story?

9. The father and son often say they are "the good guys" while "bad people" are out there, needing to be avoided and feared. They also speak of "carrying the fire." What is the meaning and significance of these themes?

10. What is the significance of the title?

11. Who is telling the story? Whose voice do you hear? (Is it the person going through the experience, or someone else telling you about that person?) How does the relationship between the narrator and the implied listener help the reader focus on what's important about the character(s)?

12. What is the span of experience covered by (or contained in) the story? How does the span help the reader understand what is at stake for the character(s)? Are there stages or periods in this span of time? If yes, what are they? Why do you think McCarthy arranges them in the order that appears in the work?

14. If you did not enjoy this work, is there a reason why you should encounter it anyway? Would you recommend this work of fiction to others? Why or why not? How would you describe the work--and your reaction to it--in a way that would make sense to a Christian friend… to a non-Christian friend? Do the two descriptions differ? Why? Should they?

GLORY be to God for dappled things-
For skies of couple-colour as a brinded cow;
For rose-moles all in stipple upon trout that swim;
Fresh-firecoal chestnut-falls; finches' wings;
Landscape plotted and pieced-fold, fallow, and plough;
And all trades, their gear and tackle and trim.
All things counter, original, spare, strange;
Whatever is fickle, freckled (who knows how?)
With swift, slow; sweet, sour; adazzle, dim;
He fathers-forth whose beauty is past change:
Praise him.

Compare and contrast this poem to McCarthy's paragraph, and book.