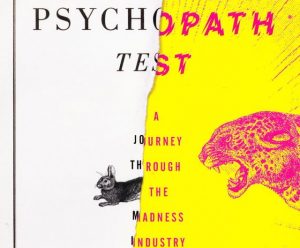 Labeling without conscience
On May 27, 2011 I happened to catch an episode (#436) of This American Life on National Public Radio called “The Psychopath Test.” Act Two, entitled “King of the Forest,” was fascinating, a little troubling, and very funny. Author and journalist Ron Jonson read an excerpt from his book, The Psychopath Test: A Journey Through the Madness Industry in which he visits and interviews Al Dunlap, the former CEO of Sunbeam Corporation. Dunlap gained a reputation in the corporate world as an executive for whom the bottom line was the only thing that mattered. Struggling companies hired him as top executive when difficult choices were necessary, and Dunlap was happy to oblige. Some felt he was far too happy about it—Dunlap didn’t just mind firing people and closing plants, he enjoyed firing people and closing plants.

It is Dunlap’s open and callous disregard for the consequences of his decisions that introduces the topic of psychopathy into the discussion. “Serial killers ruin families,” one researcher commented. “Corporate and political and religious psychopaths ruin economies. They ruin societies.” We usually think of psychopaths (or sociopaths—the terms are used interchangeably) as serial killers or rapists involved in brutally violent crime sprees but researchers in the field of psychopathy define things with greater subtlety. Certainly psychopaths are found in prison, they say, but they are also found in the worlds of politics, business, religion, and finance—wherever brutally decisive, risk-taking, powerful, apparently conscienceless, and manipulative people flourish.

At the most common level, psychopaths are defined as people who are essentially without conscience. They have trouble connecting consequences to actions, and sense no empathy for another person’s fear or pain. One researcher showed photos to a convicted serial killer that depicted faces contorted by strong emotion, asking him to name the emotion the person was feeling. When she showed several depicting intense fear he responded calmly that he didn’t know the name of the emotion but that the women he tortured to death had that expression just before he killed them.

Jonson’s appearance on This American Life was funny, even though psychopathy is hardly a topic naturally given to humor. His book, The Psychopath Test, is funny too—a few times I chuckled out loud as I read. His humor comes from his delightful self-effacing style of journalism, and having a knack for juxtaposing facts and stories in ways that allow the absurdity of life to be revealed without descending into cynicism or losing sympathy for the people and events he is investigating.

Still, Jonson is investigating an important and disturbing slice of reality, and one that is worth some careful thought. Although psychiatrists do not include an entry for psychopathy in their professional diagnostic list of mental illness, the DSM-IV (Diagnostic & Statistical Manual of Mental Disorders, 4th edition) the diagnosis is used in the criminal justice system, usually based on a 20-point checklist developed by a psychologist named Bob Hare, and can result in incarcerating individuals deemed dangerous for unlimited periods.

The Psychopath Test: A Journey Through the Madness Industry is one of those remarkable finds, a book on an important topic that is also a delight to read. And the questions it raises for Christians are varied and probing. Does our view of the Fall include such deep brokenness that some people might actually be born without a conscience? Would this possibility call into question our conviction that human beings bear God’s image? How does the gospel of grace come to a psychopath? Does the use of the Hare PCL-R Checklist in criminal proceedings sometimes unjustly incarcerate people? I am not suggesting we all need to become activists on the issue, but The Psychopath Test will help us understand the deeper meaning of news stories that would be otherwise largely ignored.