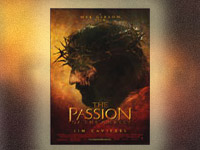 Over the months prior to the release of The Passion, Mel Gibson arranged for a number of screenings of the film. This allowed him to receive feedback before the final editing process, and to discuss the controversy swirling in the media concerning the film’s alleged anti-Semitism and lack of historical accuracy. The one I attended, at Charlie and Andi Peacock’s Art House in Nashville, included evangelicals who were active in the arts.

The film opens with Christ agonizing in prayer as his disciples sleep, and follows him through the final twelve hours of his life, through his arrest, trial, torture, crucifixion, and burial. Watching the violence depicted in The Passion was almost beyond my endurance. I have watched some very violent movies over the years, and believe there is a place for artists to depict violence in ways that unsettle us. In fact, violence and death should unsettle us in this sad world. Sanitized depictions where the bad guy falls down neatly after being shot may be pleasant, but those who love truth should find such depictions objectionable. Violence and death are great horrors, so horror is the appropriate response to them.

The Passion is not difficult to watch because it is about Jesus’ death, but because of the way Gibson has chosen to make the film. There are cinematic techniques which directors can use to achieve a level of realism while softening the horror. The camera may shift away during the beating, as in Glory when the character played by Denzel Washington was flogged, so we see not the entire beating but the faces of onlookers, sharing their horror. Or the scene may cut away and return later, so we only watch the beginning and the end of the violent encounter. In The Passion, however, Gibson wants us to watch as if we were there, and to sense the full horror of what Christ endured. The Roman flogging goes on and on, and then on some more. The crucifixion is shown in excruciating detail. Never again will I be able to mention the death of my Lord without flinching inside. Nor will I be able take the bread and wine of the sacrament without a sense of dread for the cost of my redemption.

The dialogue in the movie is all in the languages of the first century —Aramaic, Hebrew, and Latin— which lends a sense of historical authenticity. The screenplay is crafted so as to provide the theological meaning of the events being depicted. So, for example, as Jesus is nailed to the cross there is a flashback where Christ takes the bread and gives it to his disciples saying “This is my body.” The few extra-biblical scenes do not undermine the truth of the gospel but enhance it. This is not a recitation of the narrative of the Gospels but a remarkably thoughtful and creative cinematic depiction of that story.

My response to The Passion as a Christian is first and foremost one of worship. I would hope churches consider encouraging their people to see the film together, and to gather at the church for the Eucharist afterwards. Certainly I desired that after the film ended far more than I desired talking about it.

My second response is to look forward to asking my non-Christian friends what they think of it. I imagine their responses will vary widely, and the discussion should be fascinating. I suspect that many unchurched viewers will wonder why Christians make so much of the cross, and we would do well to discuss among ourselves how we can speak of it in terms that people in our pluralistic world might be able to understand. And since there is an offense to the cross, I will not be disappointed if other thoughtful films provoke better discussions.

My third response involves the charge of anti-Semitism. This is an opportunity to make clear that we believe that we are all responsible for Christ’s death. This fact is expressed by Mel Gibson in The Passion, but in a cinematic technique that casual viewers might miss. Gibson does not appear in the film, except once. When Christ is nailed to the cross, it is his hands which wield the hammer and drive the spikes home. “Mel Gibson’s hand is the one that puts the nail in Jesus’ hand,” it says on the film’s website, “symbolic of the fact that he holds himself accountable first and foremost for Christ’s death.”

After one of the advance showings, a Christian in the audience told Dennis Prager that he wished he could take a gun and shoot the people who had so mistreated Jesus. “I couldn’t blame him,” Prager, a practicing Jew, said. That is a gracious response, but since the man in question claims to be my brother, I would like to respond. And my response is unequivocal: Christ forgave those who crucified him, so your desire is wicked, your speaking it aloud inexcusable, and your failure to identify with a sinful humanity a reason to doubt your acceptance of grace. Jews have been persecuted repeatedly by Christians over the past 2,000 years as “Christ-killers.” We must use this opportunity to repent and promise, Never again!

The Passion begins with a black screen on which the words written so many centuries ago by the prophet Isaiah appear: “He was wounded for our transgressions, he was bruised for our iniquities, and by his stripes we are healed.” When the film ended one of the first questions asked of Gibson was why he had made the film. “I grew up in a religious home,” he answered. “A Catholic home, but I grew up wild and became a monster. When you are a monster you end up being deeply wounded. All I can tell you is that because of his wounds, my wounds have been healed —and if you think that sounds corny, you should know that I don’t really give a damn.”

The film will remain controversial because the story it tells is not neat and pleasant, but brutal and bloody. Who would have guessed that redemption could be found in something so utterly horrible?

1. What was your initial or immediate reaction(s) to the film? Why do you think you responded that way? In what ways were the techniques of film-making (lighting, casting, direction, script, music, sets, action, cinematography, editing, etc.) used to tell the story, or to make it plausible or compelling? In what ways were they ineffective or misused? 2. With whom did you identify in the film? Why? With whom were we meant to identify? What did you think of the way Jesus was portrayed? Discuss the various characters in the film and determine their significance for the story: Satan, Judas, Mary, Pilate, Pilate’s wife, the other Mary, the disciples, the Roman soldiers, the Jewish leaders and priests. 3. Has the film changed your attitude about Christ’s death? 4. How does The Passion compare and contrast with other films which depict the death of Christ? Which is closer to the truth of the biblical text? How is the depiction of Jesus similar to/different from the usual depiction in popular religious art? 5. How is the depiction of the actual crucifixion similar to/different from the usual depiction in popular religious art? 6. Note the various extra-biblical scenes included in the film. Do they add to the message of the film or detract from it? 7. Did any of the scenes cause you to see the narrative of Scripture in a different light? Is it legitimate to have a film affect our view or interpretation of Scripture? 8. A few Christians object to The Passion on the grounds of the second commandment, which forbids the making of any image to depict divinity. How would you respond? (See for example, chapter four “The Only True God” in Knowing God by J.I. Packer.) 9. The graphic depiction of Christ’s flogging and crucifixion suggests that it was a horrible event, wrenching almost beyond endurance to watch. With this in mind, should Christians ever get comfortable with the story? To what extent is it right to speak of the cross without any sense of horror? What does this suggest for 1) our own private devotional life; 2) our corporate worship; 3) our wearing a cross as a piece of jewelry; and 4) our way of speaking about the cross? 10. How are your non-Christian friends responding to the film? Why do they think they responded the way they did? How do they understand the events they saw depicted? Are there ways in which they are misunderstanding the message of the film? To what extent does the movie provide an opening for discussion? How might we best prepare for such conversations? 11. Why might The Passion fail to generate a good discussion with some non-Christians about the Big Questions of Life? What films might provoke better discussion? 12. What emotions does The Passion evoke in Christians? In non-Christians? 13. The two main charges against The Passion that have been popularized in the media are that 1) it is anti-Semitic or may whip up anti-Semitism in some believers; and that 2) it is anti-historical. What arguments have been put forward to support these charges? What aspects in these charges are true and therefore should be affirmed by us? What is the Christian response to the charges which are not true? 14. One question that might arise is how this particular crucifixion, out of so many, 2000 years ago in a distant province of the Roman empire can possibly have significance for us today. What is the Christian response? What might a non-Christian need to consider, especially if they are unchurched and largely unaware of biblical Christianity, before they are ready to accept the significance of The Passion for their own life? 15. Consider a cross as a piece of jewelry and as a tattoo. Could the argument be made that if a Christian is going to wear a cross, it should be a tattoo (instead of jewelry) because the tattoo involved pain, is far more permanent, and serves less to “prettify” than to identify? Why or why not? 16. Should Christians who decline watching films chosen by their non-Christian friends because the movies are “too violent” invite those friends to see The Passion? 17. If you plan to lead a discussion on this movie and find these questions insufficient for a full discussion, our generic movie questions might give you more ideas. Want to discuss this movie within a community of believers? Join our discussion board (hosted by *cino) where Christians address issues of all kinds with integrity and grace.