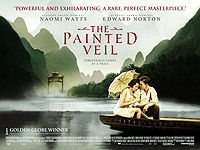 Walter Fane (played by Edward Norton) and Kitty (played by Naomi Watts) marry soon after meeting. Both are in a hurry. Dr. Fane is about to leave for China to study infectious disease; his bride is desperate to escape her stifling upper-class British family.

When cholera breaks out in the interior, Fane drags Kitty to a remote Chinese village where long-smoldering resentment against intrusive Westerners threatens to erupt into open rebellion. Based on a 1925 novel by M. Somerset Maugham (1874-1965), the film moves too slowly, but unfolds a sensitive, thoughtful story of love, lust, marriage, relationships, forgiveness, and communication. As the tagline notes, “Forgiveness comes at a price.”