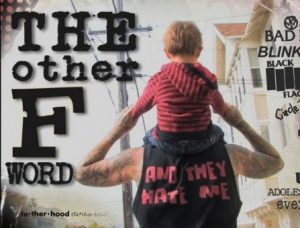 When punkers meet fatherhood
Punk rock is no longer a novel phenomenon, and like most things in our consumerist society, has gone mainstream. It is a musical phenomenon born, I think, out of frustration with the insignificance of life, a revolt against order imposed but never convincingly explained or justified, a desperate desire to feel alive in a society that seems increasingly designed to make one feel numb. Like a primal scream, punk rock provided space for young people to feel they are not alone when they feel lost in the cosmos—if the lyrics seem anarchic and the music angry, it is because they were meant to be.

In 1988, when the movement was first growing on the fringes of popular culture a band named Pennywise was formed in Hermosa Beach, CA. On their 1991 album, Pennywise, they sang “Rules:”

In case anyone missed the point, they made things even more explicit on their 2001 CD, The Land of the Free? A song that seemed to strike a chord in many of their fans, the simple title screamed into the microphone by Jim Lindberg could be understood even by those who found most punk rock indecipherable: “Fuck Authority.”

Then something happened to Lindberg—and to Art Alexakis (of Everclear), and Lars Frederiksen (of Rancid), and Ron Reyes (of Black Flag), and Flea (of Red Hot Chili Peppers) and a number of other punk rockers. What happened is that they became an authority figure. They became fathers—the “other F-word”—that suddenly made life look and feel very different. Now they had responsibility for children that could be lovingly fulfilled only if they exercised authority. Their story as fathers, complete with interviews and scenes with their families, is told in a documentary named The Other F Word (2011).

As a Christian I would argue that the punk movement is only partially mistaken. It is right in asserting that something is wrong, but it has failed to find a sufficient solution. It is right to give voice to a generation for which fragmentation has been made normative, and for which meaninglessness is endemic. Simply throwing off authority is insufficient, however, because the problem is deeper than that, running through all hearts, whether of the oppressor or the oppressed. What’s needed instead is a freedom so luminously transcendent that all the dark forces of hurt and dehumanization wither before it.

In becoming fathers, these musicians happened upon a strange truth. This truth was known by the ancients but is rarely demonstrated, even by those who claim to believe in it. The truth is that when the authority figure truly loves us unto death, we find their word to be not restrictive but freeing.

I recommend The Other F Word to you. It is an eloquent testimony to God’s common grace.

1. What was your first impression of The Other F Word? Why do you think you reacted the way you did? 2. What has been your personal relationship to punk rock? If you do not particularly like it, do you get it? 3. Some Christians or social conservatives would find this documentary offensive because of its frequent use of the other f word. How would you respond? Others would be dismissive of the film saying that such men are probably not going to be good fathers in any case. How would you respond? 4. Identify some specific ways that your ideas and values have been changed or challenged or transformed not by something in Scripture but by something of God’s common grace. 5. What, if anything, did you find most poignant in the film? What did you find most surprising? 6. How would you define “common grace”? To what extent is God’s common grace a significant part of your view of life and reality? What Scripture texts help us understand it? 7. If you are a parent (especially a father), describe the way(s) this experience changed your life, your values, and your outlook. 8. If you are single or childless, what did you see and hear in The Other F Word that helps you better comprehend the meaning and significance of fatherhood? 9. It seems significant that many of the punk musicians interviewed in the film came from badly broken homes. What are the ripple effects that you see in the lives of friends who have deep wounds from their childhood?